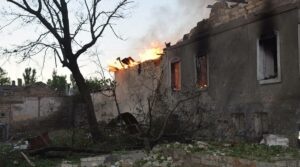 News this week show how Russian missiles struck at Mykolaiv, the southern port city of Ukraine on July 31 resulting in the death of the owner of a prime exporter of grain. At the same time, a drone struck in Sevastopol where the Black Sea naval base of Russia is situated. This was initiated from within the location in the form of a ‘terrorist attack.’ These details were put forward by a Russian lawmaker this week.

The attack in Mykolaiv resulted in the killing of Oleksiy Vadatursky, who founded and owned Nibulon, an agriculture company. The incident also resulted in the death of his wife in their home in the city. Their deaths were announced on the messaging platform Telegram by the Governor of Mykolaiv, Vitally Kim.

This Ukrainian Port City comes as across as a rather crucial location, bordering the region of Kherson, which is mainly occupied by Russian forces at the moment. The headquarters of Nibulon is situated in this location, with its speciality lying in producing and exporting of corn, barley and wheat, possessing its own shipyard and fleet.

The attacks on Mykolaiv:

The Mayor of the city, Oleksandr Senkeych referred to the 12 missile attack as ‘probably’ the strongest on the city in the last few months of the Russian invasion. It ended up striking homes and schools wounding a minimum of three individuals. He reported the resumptions of the attacks on the night of July 31 without any data on any possible damage or injuries.

Sevastopol, occupied by Russians at the moment resulted in about five Russian navy personnel sustaining injuries by means of an explosion. This following an apparent drone flying into the courtyard of the Black Sea fleet of Russia. This was reported to the Russian news outlets by Mikhail Razvozhayev, the governor of the port city of Crimea. He cited this attack on the location for upsetting ‘Navy Day’ for them.

On the other hand, a member of the Russian upper house of parliament, Olga Kovitidi gave a different reason regarding the strike to RIA news outlet of the country. They stated how the strike on the city was definitely initiated from internal sources from the Sevastopol territory.

The navy base attack came on the Navy Day for Russia about which the Russian President announced that in future few months, navy would get ‘formidable’ hypersonic Zircon cruise missiles, which can move at a speed nine times faster than sound.