President Vladimir Putin of Russia has directed his government and central bank to develop a system that will require individuals to report their cryptocurrency holdings.

According to INC-News, Putin has given the bank chiefs, as well as the Ministry of Finance and the Ministry of Labor, until November 15 to report back to him on their proposals for “verifying the accuracy and completeness of information” on the “ownership of digital financial assets, other digital property, and digital currency” – and it appears that the President is looking for a joint report, with the finance minister and the labor minister. 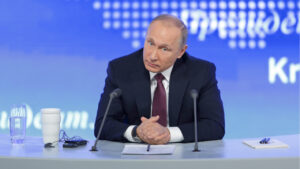 Putin’s plan is part of the larger “National Anti-Corruption Plan for 2021-2024,” which was signed into law by the president earlier this month. The concept entails increasing the monitoring of civil officials by requiring them to record their income and expenses. A number of public authorities and private sector individuals are suspected of owning large amounts of cryptocurrency, which Putin wishes to eradicate.

Corruption is rampant in Russia, particularly in government, but also in other sectors – and Putin has attempted to combat it with his new measures, the crypto-specific sections of which are set to take effect in September 2023, according to the decree’s timeline.

In Transparency International’s Corruption Perceptions Index ratings last year, Russia was ranked 129th out of 180 countries, the lowest in Europe. Russia had a score of 30 out of 100, while the top two countries (Denmark and New Zealand) received an 88. Somalia was the lowest-ranked country, with only 12 points.

However, enforcing these safeguards will be another story. Russian regulators, on the other hand, have previously stated that they are already equipping themselves with equipment that will enable them to do so. Last year, the Federal Financial Monitoring Service (also known as Rosfinmonitoring in Russia) apparently built a prototype for an AI-powered platform that can “partially” de-anonymize crypto transactions and other relevant data.

According to reports, Rosfinmonitoring claims its method works not only for tracing bitcoin (BTC), ethereum (ETH), Omni (OMNI), and dash (DASH) users but also for persons utilizing the privacy coin monero (XMR).

If you find this article informative then do share it with your friends and family! Also do let us know what are your thoughts in the comment box below.