Ryan Reynolds and Blake Lively are stepping up to encourage fans to aid Ukrainian refugees who have been forced to evacuate their homes as a result of the Russian invasion. The couple turned to social media to announce that they will match donations and invited supporters to give to the United Nations High Commissioner for Refugees throughout the crisis. 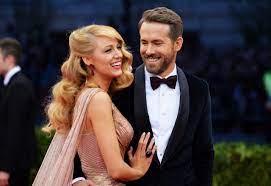 Having shared a note on his social media, Reynolds wrote, “In 48 hours, countless Ukrainians were forced to flee their homes to neighbouring countries. They need protection.When you donate, we’ll  match it up to $1,000,000, ccreating double the support.” In his tweet, he also included a link to the United Nations’ refugee fundraising page.

Blake also announced the news on her Instagram page, where she posted a photo of a mother with a toddler wearing a jacket in the Ukrainian colours of blue and yellow.

The Gossip Girl star stated, ‘@vancityreynolds and I are doubling every dollar donated to @usaforunhcr up to $1,000,000 link in bio to donate.’@usaforunhcr is on the ground helping the 50,000+ Ukrainians who had to flee their homes in less than 48 hours.

Ryan and Blake, who married in 2012 and have three children: James, seven, Inez, five, and Betty, two, have repeatedly stepped up to help in times of need. In the midst of the ongoing COVID-19 outbreak, the couple contributed another $1 million to Feeding America and Food Banks Canada earlier this month. When the pandemic began in 2020, the two had already contributed $500,000 to the charities.

Ryan and Blake donated $13,000 to a charity for Welsh soccer star Jordan Davies and his girlfriend Kelsey Edwards following the stillbirth of their son in January.

The couple donated $1 million to the American Civil Liberties Union and the NAACP Legal Defense and Educational Fund in September.

The couple has also donated $500,000 to help homeless adolescents in Ryan’s home nation of Canada, $40,000 to aid in Haiti’s earthquake recovery efforts, and $2 million to support immigrant children’s rights.