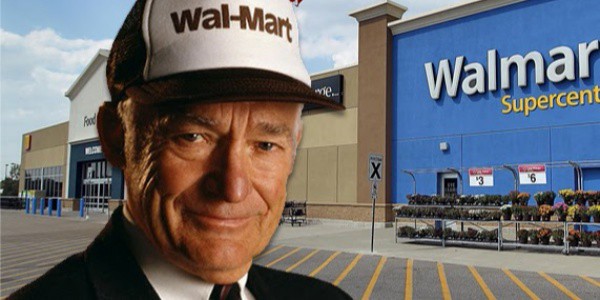 Once upon a time, he was the richest man in America. Best known for founding the world’s largest corporation by revenue, as well as the biggest private employer in the world – Sam Walton.

Proceeding with the series, ‘Remarkable CEOs’, the next name on the list is none other than ‘Sam Walton’. Jim Collins mentions Walton in his book, Good to Great as a visionary leader who rose to the top through sheer hard work.

Born on March 29, 1918, in Oklahoma, United States, young Sam spent most of his childhood with his parents on their farm.

When farming was not able to provide enough for raising the family, his father moved to the farm mortgage business.

Sam Walton’s first work experience came when he started working in his brother’s company Walton Mortgage, which was an agent for the Metropolitan Life Insurance.

Due to the unsettled business, he had to move through a lot of small towns along with his family. In his eighth grade, Sam became the youngest  Eagle Scout in the history of the States.

Sam graduated from the David H. Hickman High School in Columbia, where he was voted “Most Versatile Boy”.

He then attended the University of Missouri with the hope of supporting his family in a better way.

He did various odd jobs during his student life to financially support his education.

After graduating from college in 1940, he soon joined J. C. Penney as a management trainee in Des Moines, Iowa.

He worked there for two years before joining the military for service in the World War II. He rose to the rank of Captain while serving his country in the US Army.

He left the army in 1945 to manage his first variety store. He purchased this store with a $20k loan from his father-in-law along with $5k he saved during his time in the army.

“Most people think that Walmart was an overnight success and was a result of just the visionary ideas of Sam Walton. But this was far from the truth.”

Jim Collins in ‘Good to Great’

The reason why Walmart is the largest corporation in the  is that Walton never gave up. He made several concepts and worked on all of them.

His initial two shops made sales volume growing from $80,000 to $225,000 in three years. This drew the attention of the landlord, P. K. Holmes. Holmes helped Walton to establish and expand his shops further due to his family history in retail.

“We’re all working together; that’s the secret.”

It was the work of several people who worked together under Walton for more than twenty long years to make Walmart a success.

” There is only one boss. The customer. And he can fire everybody in the company from the chairman on down, simply by spending his money somewhere else.”