Samsung, on August 5th, released its latest iteration of the Note series smartphones.

The powerhouse of Samsung’s, range, the Note 20 boasts a 6.7 Inch infinity-O AMOLED display, with 1080×2400 resolution. Sticking with Exynos like previous generations, the Note 20 runs an Exynos 990 2.4GHz octa-core processor. The camera being a key point of attraction for most users, Samsung has given the Note 20 a tri-lense set up, including two wide-angle 12MP cameras and a 64MP Telephoto camera, giving the phone the capability of shooting 8K video. The phone also sports a 10MP front facing camera. 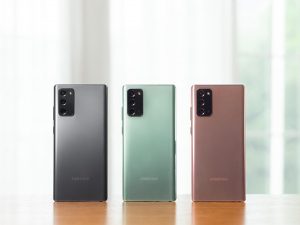 The Samsung Galaxy Note 20 runs Android 10 out of the box and packs 256GB of internal storage, expandable via microSD card. Sporting an IP68 dust and water protection rating, Samsung has released the Note 20 in three unique colourways, Mystic Bronze, Mystic Grey and Mystic Green. Dubbed by Samsung as “a PC for your pocket”, the Note 20’s 4300mAh battery is supported by Super Fast Charging, Wireless Fast Charging 2.0 and Wireless PowerShare. The phone also boasts Bixby, Bixby Vision and a Dolby Atmos stereo system. Retaining the iconic S Pen, Samsung states its capabilities and ease of use have been greatly improved by the 120Hz display.

The Note 20 is now on sale for just under Rs.78,000. Samsung however, have also announced the upcoming release of the Note 20 Ultra. The Ultra sorts similar specs to its younger sibling, however with a larger 6.9 inch display and 4500mAh battery. The phones will also offer differing camera set-ups, with the Ultra sporting a 108MP Wide-angle camera and 12MP Telephoto camera, capable of 5x optical zoom, to the Note 20’s 3x, and 50x Super Resolution Zoom, to the Note 20’s 30x. Both interations are capable of shooting slow-motion video up to 960fps.

Expected to be priced at around Rs.97,000, the Ultra is due to release during the second half of August.