The Securities and Exchange Commission said on Tuesday that it hopes to establish a framework for regulating certain cryptocurrencies and crypto markets, but it would need Congress’ cooperation first. 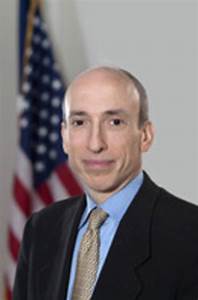 Chairman Gary Gensler of the Securities and Exchange Commission pledged to “take our authority as far as they go” to protect investors, but acknowledged that “gaps” exist in defining the SEC’s role in regulating developing technology.

“We need more Congressional authority to keep transactions, goods, and platforms from falling through the regulatory cracks,” Gensler said at the Aspen Security Forum on Tuesday. He also requested “additional resources” to staff up the SEC’s crypto initiatives.

This week, lawmakers are also debating the treatment of crypto brokers for tax reporting purposes, which is included in the infrastructure package.

In an email to Yahoo Finance, Boltansky said, “At the moment, there is insufficient unanimity on Capitol Hill on these issues, and the odds are stacked against comprehensive digital asset legislation as a result.”

The Gensler speech served as a reminder, he said, that “no single regulatory institution would be able to respond with a complete regulatory regime.”

The Federal Reserve and a Treasury-led working group on crypto-related issues are expected to release studies soon that could set down the groundwork for an interagency strategy.

‘Do not make a mistake.’

Nonetheless, Gensler’s remarks provide the most in-depth look at how he wants the SEC to monitor and enforce crypto regulations.

The chairman of the Securities and Exchange Commission (SEC) advised crypto observers to “make no mistake” about the agency’s jurisdiction over tokens issued as securities, trading platforms that allow for the exchange of securities, and custodial services.

Many tokens and exchanges are now unregistered, according to Gensler, who wants to engage with Congress and other regulators to close these “gaps.”

“To be honest, it’s more like the Wild West right now,” Gensler added, referring to crypto frauds and fraud, which could pose national security problems in some situations.

Gensler stated that he was not opposed to cryptocurrencies or the technology that supports them in general. Prior to joining the SEC, Gensler worked on blockchain technology at the Massachusetts Institute of Technology, and he said he wants to put safeguards in place to protect investors.

“It might be a speculative play if someone wants to invest in gold or silver, as they have in the past. But, on top of that, there’s investor protection,” Gensler explained. “I believe that boosts economic activity.”