Self-Driving Car Start-up to be Introduced in India Minus Zero raised $1.7 million seed round led by Chiratae Ventures this week

Minus Zero is an Indian based start-up that is looking make self-driving cars into the mainstream in the country. The start-up was established two years ago back in 2020 by Mr. Gangandeep Rehal and Mr. Gursimran Kalra. The company’s head office is situated in Bangalore.

The company had its first ever successful prototype run last year where they built a self-driving auto rickshaw successfully. This run took place in Punjab. 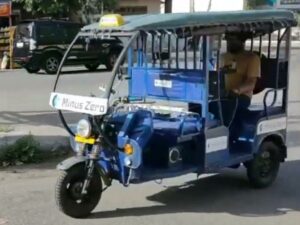 The vehicle was able to follow the lanes, drive efficiently in the busy traffic, identify pedestrians and drive accordingly, and even identify other obstacles on the road. The spokes people of the company said that this is the first step of their long and revolutionizing journey and that they are looking to have an entire arsenal of self-driving cars with them soon. The company plans to compete with other cabbing companies like Ola and Uber in the future.

On the 23rd of May, the company successfully raised $ 1.7 million USD in investments which heralded the next stage of their expansion. Many funds management companies, angel investors and cabbing companies like American based cabbing company Lyft, expressed interest in funding the company and injected much needed funds in to it.

The company’s spokes people also said that with their unique programs and algorithms along with sensor-based camera’s, the self-driving auto mobiles are able to scan the nearby vicinity for lanes, other vehicles, pedestrians, and obstacles on the road for a smooth and safe drive. They went on to say that the company is pioneering a field that is not only non-existent in the country but are also making them affordable and mainstream so that the massive middle class of India will have access to these new age services.

Minus Zero also said that they are breaking the stereotypes of artificial intelligence and self-driving vehicles as many people assume its complex with a whole lot of sensors and cameras; but, instead of that they are building programmes and artificial intelligence that stores data, and infers and learns from it, making it an intuitive piece of technology that makes the safest and optimal decisions on the go just like a human driving the car.

With this fresh batch of funds, the company will look to scale their operations across the nation and also start increasing their arsenal, where they will have a whole range of self-driving vehicles at their disposal to serve their customers.