Shopify allows merchants to mint and sell NFTs on its platform

Shopify (NYSE: SHOP), a popular eCommerce and payment services business, is making strides in the Bitcoin market. According to a tweet by the company’s CEO, Tobias Lütke, the Shopify company has now introduced the option to mint and trade collectible tokens, also known as nonfungible tokens (NFTs), on its platform.

Use Shopify for your NFT dropshttps://t.co/sZwjLZetoU

The firm has partnered with GigLabs NFT, a startup that specializes in providing tools to develop, mint, and trade NFT based on the Flow blockchain, to provide this new service.

Furthermore, as seen on the Shopify page, NFT can be created in other cryptocurrencies such as Ethereum, Polygon, Near, and Flow by combining Shopify’s partner apps. 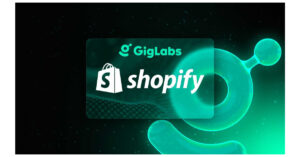 The NFT Beta program is only available to Shopify Plus businesses based in the United States, according to the Shopify website. Customers interested in integrating the GigLabs NFT app with their Shopify Plus accounts should contact GigLabs directly for more information.

NFT fans may buy the items using a variety of options, including Shopify Payments and Shop Pay. Payments can be made with cryptocurrencies, credit cards, or debit cards. Customers that purchase NFTs will receive an email containing the NFTs, which they can subsequently deposit to their digital wallets directly.

Even though Shopify is new to the world of NFTs, the cryptocurrency sector is familiar territory for the company. After cooperating with BTCPay, Shopify began taking Bitcoin in 2020 and provided the opensource service with the capability to integrate different functions in Shopify-powered stores.

Shopify shops can use software that behaves similarly to a Bitcoin wallet and acts as a self-hosted payment processor. It’s no surprise that Shopify wants to join the NFT ecosystem, given that NFT sales increased to $10.7 billion in the third quarter of this year.

While we’ve already seen Coinbase and Sotheby’s pivot and enter the world of non-fungibles, each with their own unique marketplace offering, Shopify is poised to be one of the first e-commerce firms to do so.

With Shopify’s Black Friday and Cyber Monday sales hitting records this year, there’s no telling how much NFT sales will boost the Canadian company’s annual numbers.

The beta program is currently only open to brands, artists, and creators who have “an established social media presence” and are Shopify Plus merchants based in the United States.

Also read: Elektra to take Bitcoin as a payment