Elektra to take Bitcoin as a payment

Ricardo Salinas Pliego has shown his support for cryptocurrencies for months, but the businessman has now taken another step forward by announcing that his Elektra stores will accept Bitcoin as a form of payment, making him the first minority to do so.

In addition to supporting cryptocurrencies, Elektra to take Bitcoin as a payment 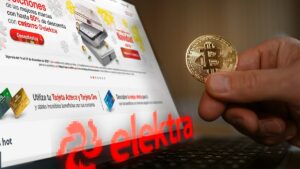 Elektra is the country’s first retail chain to take Bitcoin, the company revealed this week on its website, noting that clients who purchase with the cryptocurrency will receive a 20% discount. Elektra will accept Bitcoin payments using BitPay, a cryptocurrency payment network.

Bitcoin has been added to the chain’s website as a new way to purchase; it even gives a 20percent discount to consumers who use this cryptocurrency.

Salinas Pliego has long been a supporter of virtual currencies and acts as a marketer; for example, in September, he liked a tweet from cryptocurrency expert Alex Gladstein, even predicting that they would reach the chain.

“We will have it in our Elektra store network very soon,” along with the hashtags “#Bitcoin” and “#LightningNetwork,” he wrote at the time.

Very soon we will have this in our Elektra store network.🚀 #Bitcoin #LightningNetwork https://t.co/Y4n7pAsBS0

But it wasn’t the first time he advocated for Bitcoin; in June, he stated that he had made investments in the market ahead of the entry of huge corporations, as well as encouraging his followers to do the same.

Now that Elektra takes Bitcoins, the chain notes that to make a payment with these cryptocurrencies, the BitPay cryptocurrency payment processing platform must be used, according to the website’s terms and regulations.

The company’s income for the third quarter of the year increased by 20 percent over the same period last year, totaling 35.504 million pesos, thanks to a 25 percent increase in financial income and a 14percent increase in commercial sales.

Grupo Elektra had 6,400 points at the end of September, down from 6,945 the previous year due to the closure of 280 outlets across Latin America.

Mexicans were the ninth most likely to own cryptocurrency, according to the comparison website Finder, which polled internet users from 22 nations.

According to Finder, 12.1 percent of the more than 2,400 persons polled in Mexico possess cryptocurrency. The most popular cryptocurrency in Mexico was Bitcoin, which was followed by Ethereum, Binance Coin, Cardano, and Dogecoin.