Rehabilitation after suffering from any major illness can be stressful. It takes a huge toll on the patient and their family. Sometimes the psychological and financial ordeal is too much to cope and a lot of people end up giving up halfway. In order to make this process a bit easier for the patient to cope with, the National University of Singapore (NUS) has come up with a robotic glove.

This robotic glove is made out of stretchy cloth and silicone rubber. Being extremely light weight by weighing around 200 g this glove proves to be much user friendly than its metallic counterparts which usually weigh between 400 g to 500 g.

This glove is capable of making the rehabilitation process much easier by being capable of detecting a patient’s intention to perform any activity with the hand. The glove then assists the patient to move it fingers and hand in order to accomplish the task.

Made out rubber, it makes easier for this glove to mimic the patients arm movements in a much natural manner compared to the metallic ones which are usually stiff and rigid in nature.

Another startup based in South Korea is also working towards achieving a similar goal. Neofect, a startup established in 2010 is capable to provide rehabilitation services to patients at very affordable prices. Ban Ho Young, the founder of the company was keen on providing access to rehabilitation treatment to every common individual.

So the company came up with ‘Rapael’. It is a smart glove which can provide rehabilitation services at home that too at an affordable price. This glove is able to function with the help of sensors that are being fit into it to monitor the movements done with the help of forearm, wrists and fingers. This data is then collected and shifted to the gloves software.

To explain the reasoning behind the process Ban Ho Young says, “Just moving someone’s hand in a certain way won’t improve that person’s condition because a large part of rehab takes place in the brain. We see a lot of focus on the clinical side of things and not enough on the motivational.” 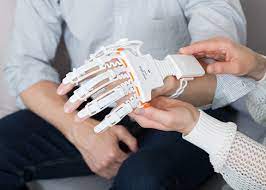 The glove comes equipped with a lot of games fit into the software. The patients play the games in order to get the limb moving and perform activities such as catching a fish or playing baseball. This helps the patients by giving them a boost of enthusiasm and the company records the data collected through the actions in order to plan regimens for each patient.

So far Rapael has been shipped to hospitals and rehabilitation centers in South Korea in order to promote and market the product. This smart glove which costs $10,000 is currently being used by one of the top hospitals in South Korea such as the Seuol National University Hospital, the Samsung Medical Center and also the National Rehabilitation Center.

The idea to start this company occurred to Ben when he lost his father due to suffering from stroke. After that two of this uncles fell prey to the illness but survived. They could not complete the rehabilitation process as it was very expensive and time consuming. Ben and his team are now satisfied that the early feedbacks of this products have been positive. But are planning to strive to provide better services to help cope with this illness.