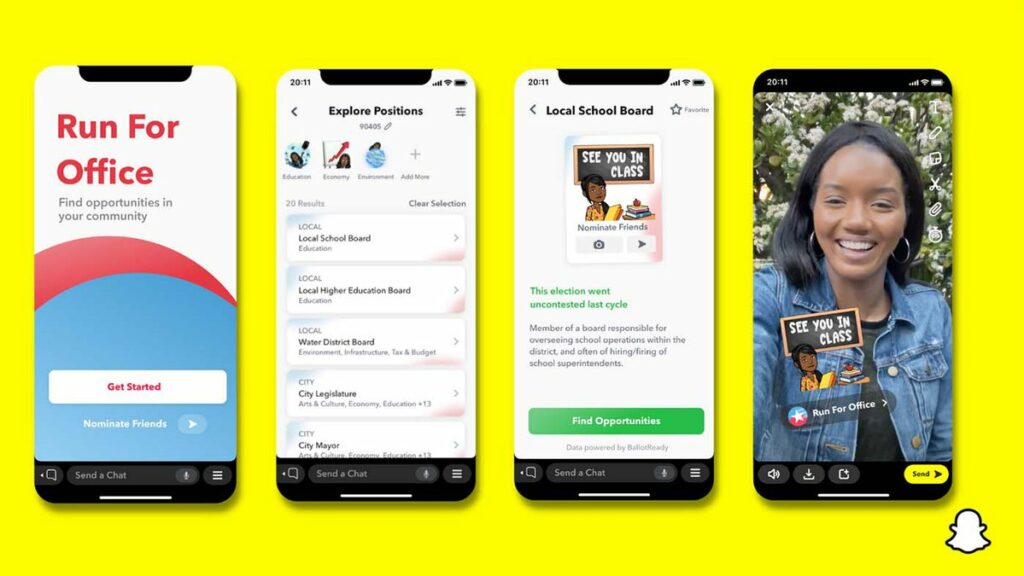 The past presidential election saw a record number of young people vote, and it may be time for them to take the next step. Snapchat, the famous social media platform for teenagers, is launching a new in-app feature called “Run for Office” to encourage young adults to run for local office.

“Powered with information from BallotReady, this simple tool will help Snapchatters explore hundreds of opportunities to run for local office based on the issues they care most about — from city neighborhood board and township council to school board and state representative,” the company said in a statement.

A centralised portal is included in the application, which curates over 75,000 forthcoming federal, state, and local elections in which users may be eligible to vote. Users will also be prompted to highlight issues that are important to them so that the tool might suggest roles that they might be interested in.

Candidate recruitment groups and training programmes such as Emerge America, Women’s Public Leadership Network, Vote Run Lead, and others are also accessible through the new tool.

This application can assist young individuals, including high school students, in taking the first steps toward running for office.

“I think it’s an excellent concept to inspire teenagers to become interested in politics and to learn how they can have a voice.” The path to running for office and obtaining knowledge may appear to be out of reach at times, yet it is a very accessible path.

“Almost all of my peers and friends use Snapchat, so promoting those positions on a widely accessible platform will really reach its target audience – teenagers,” TUSD student representative Kate Ogden said.

A personalised campaign hub is also included in the programme, which tells people how to get on the ballot. There’s also information on filing deadlines and signature requirements on the hub.

Snap claims that their app reaches 90% of 13 to 24-year-olds in the United States, giving it the chance to urge young people to become more involved citizens. Run for Office is now available to all Snapchat users in the United States by swiping down on the app’s camera screen or looking for the tool within Snapchat.

“We know this next generation is the most diverse, yet currently only 6 percent of state legislators are under the age of 35. We hope our Run for Office initiative will help shape a more equitable, and reflective, democracy that includes all Americans, including young people,” the company said.