Jim Cramer, the host of Mad Money, has some advice for crypto investors. “You have my okay to speculate on crypto as long as you acknowledge the very possible chance that the entire investment case for crypto is based on the greater fool idea,” he stated. Cramer went on to say that he’s holding Ether because “there could be millions of greater fools out there.” 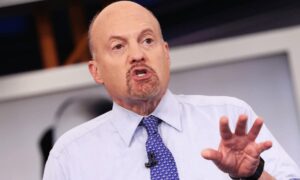 Jim Cramer discussed crypto investment on Thursday. Former hedge fund manager and co-founder of financial news and literacy website Thestreet.com said: ”As long as you recognize the very real possibility that the whole investment case for crypto rests on the greater fool theory, you’ve got my blessing to speculate on it”.

According to the greater fool idea, the price of an asset is determined by whether or not you can sell it for a better price at a later date. The theory states that you can profit from the purchase of an asset because someone else will someday be eager to acquire it from you at a greater price.

“I know a lot of people say silly things about crypto,” Cramer continued, “and I’ve gotten a lot of flak for realizing that.” He did, however, highlight: ”At the end of the day, I’ve said repeatedly that you can use bitcoin or ethereum as a hedge against inflation, up to 5 percent of your savings, as a replacement for gold”.

In August, the Mad Money host suggested investing up to 5 percent of one’s portfolio in cryptocurrency, claiming to be a crypto believer. In March, he stated that gold had let him down. “I didn’t buy Bitcoin or Ethereum as inflation insurance,” Cramer continued. To be honest, I was speculating. But I was simply betting on crowd psychology, and I have no idea why these prices rose, other than the fact that there are a lot of overconfident people who want to buy high and sell high.”

He elaborated:”I’m holding onto my Ethereum because I believe there could be millions of greater fools out there. I think that’s a decent bet”.“I don’t have any particular attachment to ethereum,” he said, “and when I think it’s finished going higher, I’ll ring the register on the remainder of my position.”

After the Chinese government reinforced its crypto crackdown in June, Cramer announced that he had sold almost all of his bitcoin. He said he invested in ETH in the same month, saying, “I like ethereum because people use it a lot more to be able to buy goods.” Due to concerns over Evergrande and Tether, the Mad Money host pleaded with crypto investors to take profits if they had any gains in September.

How do you feel about Jim Cramer’s comments? Let us know in the comments.