The field of robots has come quite far when it comes to innovative solutions due to the advancement of technology in the past few decades. Nowadays, robots are a growing trend. Almost all the sectors are now incorporating robots in order to carry out difficult tasks. Not only that, robots are also utilised to function in extreme weather conditions that are not bearable by humans.

Robots are also used for a lot of environmental purposes. They can be used to capture data on sensitive environmental areas while not disturbing unique flora and fauna present. Usually, soft robots are used to carry out such tasks.

Recently, the engineers from Duke University have developed a new soft robot which is shaped like a dragonfly. This robot is completely electronics free and is able to skim across water effortlessly. This robot is designed in order to react to environmental conditions such as temperature, pH or presence of oil. The details about this robot are available in the journal ‘Advanced Intelligent Systems’.

The first author of the paper and a PhD student Vardhman Kumar said, “I got an email from Shyni from the airport saying she had an idea for a soft robot that uses a self-healing hydrogel that her group has invented in the past to react and move autonomously.”

They further added that, “But that was the extent of the email, and I didn’t hear from her again for days. So the idea sort of sat in limbo for a little while until I had enough free time to pursue it, and Shyni said to go for it.”

Shyni Varghese is currently serving as the professor of Biomedical Engineering, Mechanical Engineering and Materials Science and Orthopaedic Surgery at Duke University.

Soft robots are getting more and more popular due to their versatile features. They contain soft parts which can be used to handle delicate objects such as biological tissues that can be damaged if handled with a metal or ceramic object. Since these robots have soft bodies, they are able to squeeze into tight places and can also float. 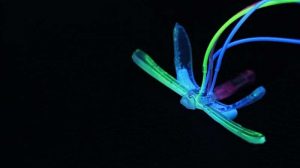 Speaking about DraBot, Ung Hyun Ko who is postdoctoral fellow in Varghese’s laboratory said, “Getting DraBot to respond to air pressure controls over long distances using only self-actuators without any electronics was difficult. That was definitely the most challenging part.”

Kumar said that, “We were happy when we were able to control DraBot, but it’s based on living things. And living things don’t just move around on their own, they react to their environment.”

The soft robot consists of a network of interior microchannels that enable it to be controlled with air pressure. The body of DraBot is about 2.25 inches long and its wingspan is 1.4 inches. The body of this robot was created by pouring silicon into a mold made out of aluminium and then baking it.

DraBot has the ability to sense changes in pH, temperature and oil. It works by controlling the air pressure that is coming into its wings. Once both wings are down the DraBot cannot go anywhere since the airflow is blocked, if the wings are up the robot can go forward.

Varghese said that, “Instead of using air pressure to control the wings, I could envision using some sort of synthetic biology that generates energy. That’s a totally different field than I work in, so we’ll have to have a conversation with some potential collaborators to see what’s possible. But that’s part of the fun of working on an interdisciplinary project like this.”