An increasing number of people across the world are reporting that they can see SpaceX’s Starlink satellites, which seem to look a lot like a chain of fairy lights moving across the night sky.

Considering the rate at which SpaceX is launching satellites into orbit via its Falcon 9 rocket, this does not come as much of a surprise. The company has sent off 16 Falcon 9 rockets within this year itself, with a maximum of 60 satellites per launch.

As of now, Elon Musk’s space firm has more than 1,500 satellites in orbit and is planning to get 42,000 up there by mid-2027. More recently, Starlink satellites have been spotted over several countries, such as the UK, Ireland, and the US, with sightings being reported in Arizona and California.

For those who are interested in catching a glimpse of these Starlink satellites, Find Starlink can provide you with information about when SpaceX’s spacecraft will be visible in the place where you are located. Users have from a multitude of cities across the world as options when they want to find out where they can look for Starlink satellites.

The creator of Find Starlink, who has not yet revealed his current identity, said that he launched the website two years ago for himself, his brother, and a friend, all of whom were living in different parts of the world.

The website, which he made in simply one evening, received half a million requests within the first five days of its launch. He has received emails from people who helped build on Apollo rockets and even those who once ruled out sightings of UFOs.

After you have entered your location, the site will show timings with good, average, and poor visibility surrounding the area that you are in. It tells you which direction to look in, the duration for which the satellites will be noticeable, and the elevation of the satellites.

If your area of location is not in the given list, you can manually type in the longitude and latitude of the location to check when Starlink satellites will be seen above. 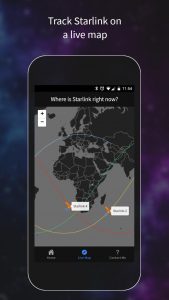 However, it is important for users to note that the timings are not always completely accurate as the orbit of the satellites constantly change.

The website is accurate four to five days after SpaceX launch a new batch of Starlink satellites, as the founder added that he sees several emails about successful sightings on a regular basis.

However, a week after the launch, it can be a bit hard to predict where the satellites will be because they are assigned to their level orbit where they are less reflective and it is difficult to see from the ground.

This is called “rolling behaviour,” when SpaceX reduces the brightness of the satellites between 300 km to 550 km altitude to not cause any disturbance to astronomers.