SpaceX Mechazilla stacked Starship atop its Super Heavy rocket. It is to start the pre-flight testing. Mechazilla is the Starbase launch tower, an a469-feet-tall launch tower that is designed to stack and recover the spacecraft. It can catch the rocket as it descends from the sky. 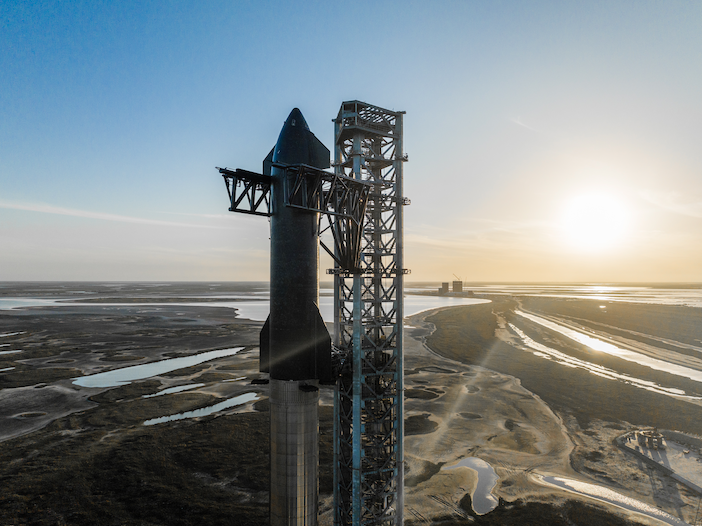 In the days ahead, engineers are expected to perform a static-fire test of the gigantic rocket’s 33 methane-fueled Raptor V2 engines. It would be the first time they fully fuel and ignite a stacked Starship duo. –”We are proceeding very carefully,” said Musk, “If there is a RUD on the pad, Starship progress will be set back by ~6 months.” RUD is short for ‘Rapid Unscheduled Disassembly,’ it is the term SpaceX uses when a rocket undergoes a serious failure that destroys a vehicle, like an explosion. Because the new launch system is actively under development anything could happen during pre-flight testing. Suppose an explosion happens at the launch pad it could potentially destroy vital components that would have to be fixed and rebuilt.

SpaceX has experienced multiple RUD’s at Starbase since 2019; These failures were not necessarily a bad thing because it provided engineers with vital insight on how to improve the spacecraft. They achieved multiple 15-kilometer flight tests of Starship prototypes. Now, they are working to launch Starship to the edge of space (~100 kilometer altitude) for the first time and Super Heavy it is set to become the world’s most powerful rocket. If all testing goes smoothly in the coming weeks, Booster 7 could propel Starship SN24 to orbit before the year ends. The orbital flight will originate from Boca Chica Beach, Texas, and end with an ocean landing along the northwest coast of Kauai, Hawaii.

Starship engineers are actively working on multiple stainless-steel Starship prototypes that will undergo similar testing. This week, they transported the Starship SN25 vehicle out of the Starbase factory to the launch pad. Now there are two spacecraft and two rockets awaiting testing, pictured below. It is important for SpaceX to have a high production rate because it enables engineers to move on rapidly to test the next prototype after a failure. “A high production rate solves many ills. If you have a high production rate, you have a high iteration rate. For pretty much any technology whatsoever, the progress is a function of how many iterations you have, and how much progress do you make between each iteration,” Musk told reporters in 2020.