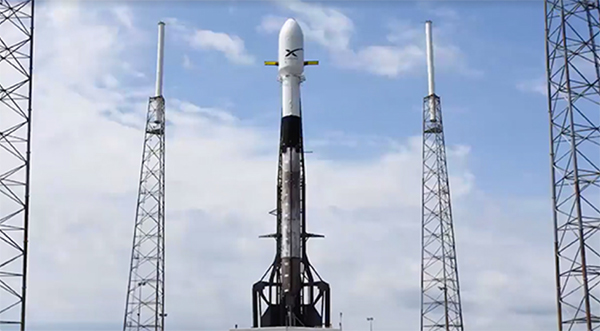 SpaceX announced that the static fire of Falcon 9 was successful for its upcoming launch in ten months. The scheduled launch will be the first Starlink launch in California and also the first in the West Coast Starlink mission.

SpaceX last used the Vandenberg Air/Space Force Base (VAFB) SLC-4 facilities for Falcon 9 to launch NASA and the European Space Agency’s Sentinel 6A Earth observation satellite. The launch was in November 2020 when the company’s first West Coast launch took place. Furthermore, the next launch of SpaceX in the location is Starlink 1-2. Not only is this launch a first, but also sets a significant start for the Starlink Orbital coverage into second the second shell.

From this orbital shell launch, all the Starlinks will be 540km away from earth. A total of 1584 Starlink satellites are to be launched and take their place in the Earth’s lower orbit.

It is known that both boosters, B1049, and B1051 were sent to the Vandenburg. Being the most flown vehicles of the space company, the booster’s static fire was from the SLC-4E launch pad. The launchpad was inactive for almost a year, so the large portions of the launchpad were possibly temporarily deactivated or mothballed. It did take a good amount of work to get the location ready. But as launches are now set, the launching location will be already in workable conditions for the next launches.

As the work of static fire was satisfactory, it was successful and scheduled for the launch. Though the booster is not mentioned by SpaceX, it is most likely to be B1049. A date is not announced, but it will be using the company’s custom laser link Starlinks. It is implied that the next launch Starlink launch could be in September.

A few aerials of SpaceX droneship OCISLY pulling into the driveway in Long Beach, CA after spending a few weeks dry-docked in a shipyard in Mexico. @NASASpaceflight pic.twitter.com/002SEFVeMz

Further, it was found that the drone ship, “Of Course I Still Love You” (OCISLY) returned to the port of long beach. The reasons behind the drone ship trip to the Mexican dry dock are unclear.

Regardless, once the laser Starlink Satellites are ready, SpaceX is set to have back-to-back launches with lesser launch gaps. Additionally, as the liquid shortage issue related to space launches came into the limelight, it is unclear how many launched could be finished this year. But as Elon Musk mentioned, it could be a difficult path, but the shortage is not a limitation. So there is no saying in how many launches could be finished this year.