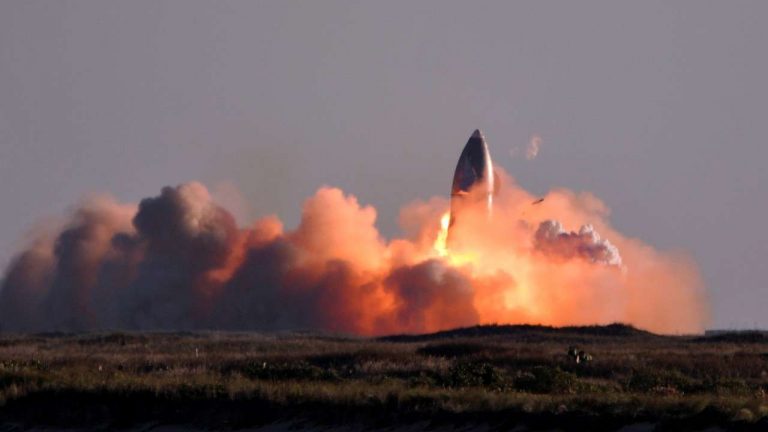 A prototype of the future towering SpaceX Starship rocket exploded on Thursday. This happened while the rocket while trying to land after its test launch program. The company aspires the rocket to be their next spaceship for the Mars mission. The test launch took place from SpaceX’s rocket facility in Boca Chica, Texas.

Specifications Of The Prototype

SpaceX’s rocket is a massive and super heavy spacecraft specially designed to carry both shipment and crew to Mars, Earth, Moon, and beyond. The company claims that it is the world’s most potent launch spaceship developed to carry 100 metric tonnes to Mars and Earth orbit.

The starship is framed with a height of 394 ft, diameter 30 ft, and payload to Leo 220+ klb. It also includes the gigantic and high-power Raptor engine; a reusable methalox staged combustion engine with a thrust of 2 MN. The spacecraft also facilitates a super heavy first stage booster with a lot many innovations stuffed in it.

Fundings For The SpaceX Starship

SpaceX received $135 M as an award from NASA for building the spaceship. Some other renowned companies like Blue Origin are also in the race to build the spacecraft. These three companies are competing for future contracts to create the Moon landers under the Artemis program by NASA. The SpaceX organization is based in Hawthorne, California, buying residential properties in the Boca Chica village to expand its spaceship research area and launch facilities.

The company’s CEO- Elon Musk, felt delighted to announce the launch of this giant spacecraft with a robust structure and capabilities. He also congratulated the scientists for the spacecraft’s successful launch and their dedication to creating the machine. SpaceX made its first attempt at creating powerful Raptor engines. And due to some technical malfunctions, the mishap took place. Musk aimed to make human space ventures more reasonable and standardized.

But despite being unsuccessful in fulfilling its objective, the company described that the test of this innovative spacecraft was “truly awesome.”

Even after the catastrophic explosion, the launch program was successful. But, unfortunately, the company’s expectation was shattered when the spacecraft underwent a catastrophic crash and exploded. After the tragic accident, the rocket that got devasted was a 16-story-tall model designed by the company to carry humans and bulk shipments. The spacecraft was intended to travel an altitude of around 41,000 feet, driven by three newly developed powerful Raptor engines.

The space agency was not able to trace, whether the rocket was successful in traveling that altitude or not. But after the tragic explosion of the rocket, Musk said that-“the explosion was the consequence of having the fuel head tank pressure low.” During the spacecraft’s descent procedure, the touchdown velocity went high due to the low pressure, which led to a terrific crash.

What are your thoughts on the explosion but successful testing of the SpaceX starship? Let us know in the comments below. Also, if you found our content informative do like and share it with your friends.