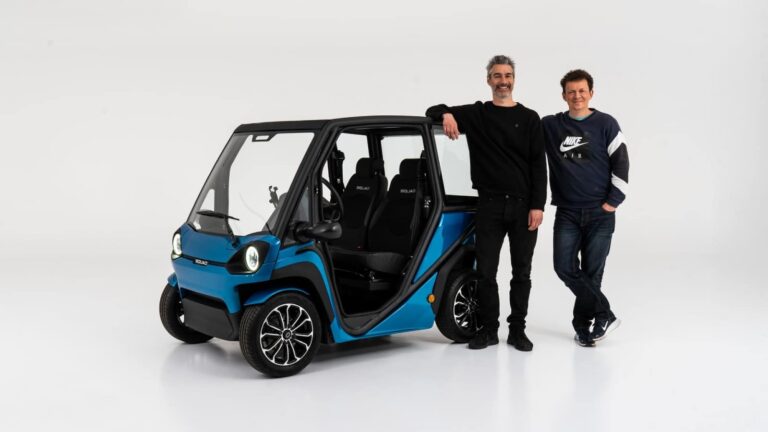 Squad solar electric city car launching in the US price starting at $6,250

Squad solar electric city car looks like a golf cart, priced at $6,250 in the US. It is being launched into the US market and the question about its ability comes as the uses are unclear. Squad Mobility is a Dutch startup founded by Robert Hoevers and Chris Klok.

The company launches the Squad solar electric car in Europe for €6,250. The small two-seater vehicle is designed to be lightweight and efficient. With its small wheels, it doesn’t take much to move it around, resulting in the relatively small solar panel on top with up to 31 km (19.2 miles) of range on a sunny day.

As for the powertrain, it consists of two 2 kW rear in-wheel motors powering four 1.6 kWh battery packs that are rapidly swappable. The electric city car can travel up to 100 km (62 miles) on a single charge with all four battery packs, and it can reach a top speed of 45 km/h (28 mph). Today, Squad Mobility confirmed that the Squad solar city car is coming to the US for $6,250 and will debut at CES in Las Vegas. Robert Hoevers commented on the US launch. He said, “We are seeing a tremendous interest from the USA, specifically for markets such as sharing platforms, gated communities, campuses, (seaside) resorts, tourism, company terrains, hotels & resorts, amusement parks, and inner-city services.”

In the US, what Squad Mobility is calling “the world’s first solar city car” will be considered an LSV (low-speed vehicle), much like a golf cart, even though it is more capable than that. For its small footprint, the vehicle is utilitarian with space for a laptop on the dashboard, a small trunk, and a foldable passenger seat.

A stroller can be fit in or a gold bag on the folded seat. For cities where it will be allowed as an LSV, the Squad is going quite easy to park since it is so small that it can even park perpendicular to the street. And if the parking spot is not in the shade, the vehicle will charge itself with its solar panel on top. While Squad will likely find private customers who would want the solar electric city car for $6,250, the company appears to be primarily going after sharing market here with a vision of fleets being deployed in cities with battery swap stations. However, said that the company will use the US debut at CES next month to find US partners to help make that vision happen.