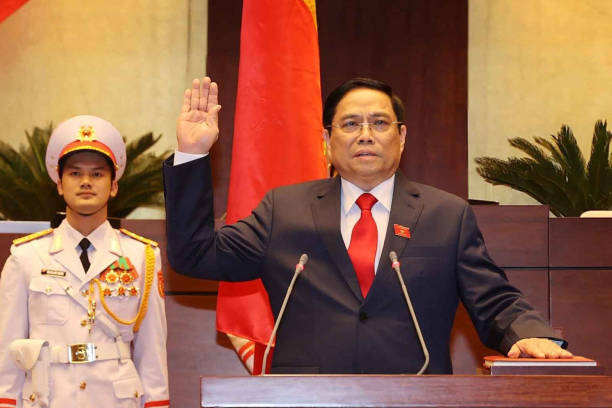 Prime Minister of Vietnam, Pham Minh Chinh asked the State Bank officials to closely study the digital currency as the country is looking forward to implementing the blockchain-based currency in the next two years. This new plan of the country is part of the nation’s latest e-government strategy.

Vietnam Government is planning to digitalize the country, and the plan also includes considering cryptocurrency which is the highlight of the entire digitalizing plan. Adoption of crypto is spreading like a trend across the globe after the El Salvador Congress legalized the cryptocurrency and became the first country to adopt bitcoin as a legal tender.

As per a report by Vietnam Plus, Vietnam has grand plans of a digital state, and crypto-based on the blockchain is among the core technologies that the government will implement as the nation recently introduced a new coin. Some other areas on which the government will focus include big data, virtual reality, and artificial intelligence.

This is the first time that the country is going to step into the world of crypto and a currency like bitcoin was never legal in Vietnam before. The financial institutions of the country were strictly instructed to avoid any crypto transactions and all the crypto exchanges and trading firms were ban in the country so far. Hence, the country’s administration has to closely examine the cryptocurrency and work on the regulatory policies to master the virtual currency in the country.

As more and more countries are welcoming virtual currency with open arms, Vietnam does not want to trail behind in the race of legalizing cryptocurrency. According to a survey, Various Central Banks across the globe are already working on the implementation of the blockchain-based currency and are at different stages of the process.

At the global level, only the currencies like US Dollar, Yen, and Euro are influencing the majority of the trade, but with the adoption of the digital currency, the countries like El Salvador, Vietnam, and others are going to impact the global financial system to a great extent. This is again a piece of great news for the crypto geeks and might positively affect the volatile crypto market, hence, the industry is looking forward to the next steps of the Vietnamese government.