StayZilla – OYO Rooms Episode – When in Conflict, Handle it Maturely !

On Friday morning of 20th March, Yogendra Vasupal, Founder and CEO of Stayzilla, received an email from one of his customers with the following snapshot !  OYO Rooms, a marketplace for branded budget hotels had infringed on Stayzilla’s trademark. 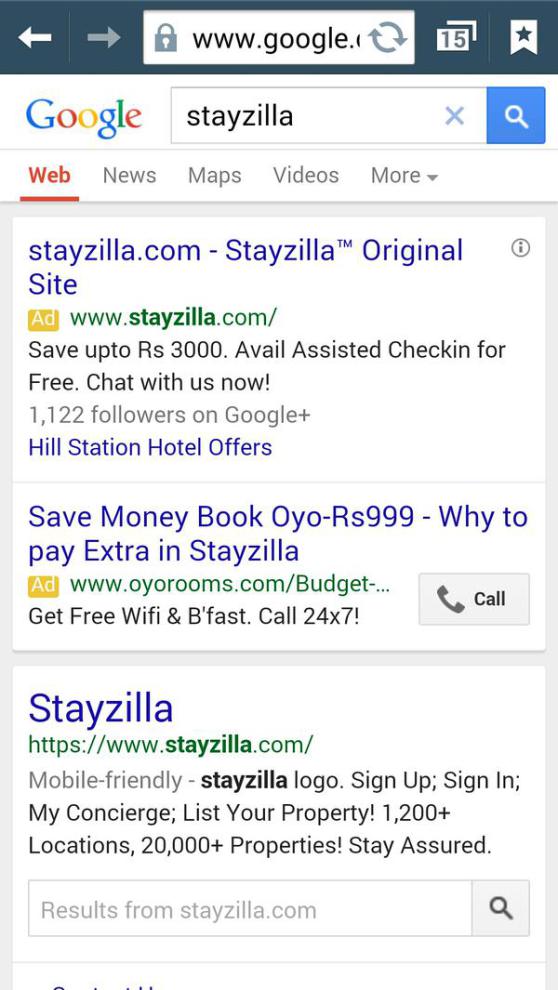 Infringing on trademarks and IP rights can often lead to court battles resulting in someone paying huge sums of money. However, in the world of today where there is cut throat competition, incidents like this are not uncommon. When Yogendra first saw this email, he sought legal advice and his legal team started working on a possible resolution to this infringement.

Then however something very interesting happened. Some of his team mates, who had gotten to know about this infringement, got together on whatsapp and started sending OYo Mama jokes to each other expressing their feelings about this latest controversy. By the end of the evening, there was some real creative stuff going around on this whatsapp group and Yogendra had to make a decision. The team wanted to take these Oyo Mama jokes on social media and wanted Yogendra ‘s go ahead.

Taking the war to Twitter meant putting our brand at risk as well. We did not want to come across as a cry baby neither could we risk being seen as a bully. So we had to be really careful. We wanted the issue resolved and I was really excited about this new strategy that the team had come up with.

And thus the OYo Mama jokes began on Twitter !

#OYoMama Rooms So Small, Her Carpet Is Our Welcome Mat! @oyorooms pic.twitter.com/ph8YG1ueet

#OYoMama so fat her weighing scale is always stuck at 999! @oyorooms pic.twitter.com/PZ3Xym5zT9

#OYoMama rooms so small, when you walk in, you already came out! @oyorooms pic.twitter.com/IfYZDBDOSS

#OYoMama Rooms So Small, You Have To Go Outside To Change Your Mind! @oyoroomspic.twitter.com/nLM6OReRSf

The tweets continued until finally, OYO Rooms stopped infringing on the Stayzilla trademark. This  whatsapp enabled, crowdsourced OYo Mama campaign had thus achieved its objective and had come to a halt.

I think we had a successful campaign because we knew our limits and stuck to them. Obviously, we did not want to create a spectacle for everyone to see, but wanted the conflict resolved asap.Also the team at Stayzilla had a lot of fun coming up with these jokes.

says Yogendra. The company could have easily taken the legal route but wanted to avoid getting into complicated legal wars.

We could have taken the legal route but really we did not want to go that way. We know and respect the founders at OYO Rooms and we also understand that it might not have been the founder’s strategy to infringe upon the trademark. As a startup,we know that sometimes there is someone in the marketing team who does something silly to get ahead of the competition.It might not really be the company’s agenda.

In the age of today where so much opportunity exists for all of us, such conflicts really should not arise.It is so easy to start a company in today’s date than it was 10 years ago. There is a market welcoming you , there are VC’s ready to fund your ideas. Such competitive methods an conflicts are really not required.

he adds. And at Techstory, we feel that even when such conflicts arise, they should be handled in a mature way just the way Stayzilla and OYO Rooms both have handled this particular conflict.

Stayzilla made sure that they attacked OYO Rooms only regarding this one point of concern. Their tweets did not get out of control nor did they get personal or cheap.

OYO Rooms too could have replied to Stayzilla’s tweets and could have made this into a full fledged war on social media. They too however choose to act maturely and did not take that route.

We believe that the best way to work in this industry is to not get into conflicts. In an industry so closely networked and connected, you never know who you might work with next. All the energy should be focused on something bigger, better and positive each day. And when in conflict, handle it maturely !