Stellantis is going to reveal its upcoming plans for its presence in China on March 1. Over the last year, Stellantis shares have gone up by 60% and investors are expecting new strategies this time. Especially considering how Tesla has set its foot strong in China and Stellantis had disappointing sales in China in 2021.

Last year in October, Stellantis announced that it is selling its DS brand in China. Adding that they are going to announce a new plan for China by early 2022. Though the overall shares of Stellantis have outperformed Tesla, in China there were disappointing sales. Chief executive Carlos Tavares promised to keep the group’s 14 brands on the condition that each would focus on its strongest markets and segments. China has been the strength of Tesla ever since Giga Shanghai started production. They have strong export values and local sales as well. 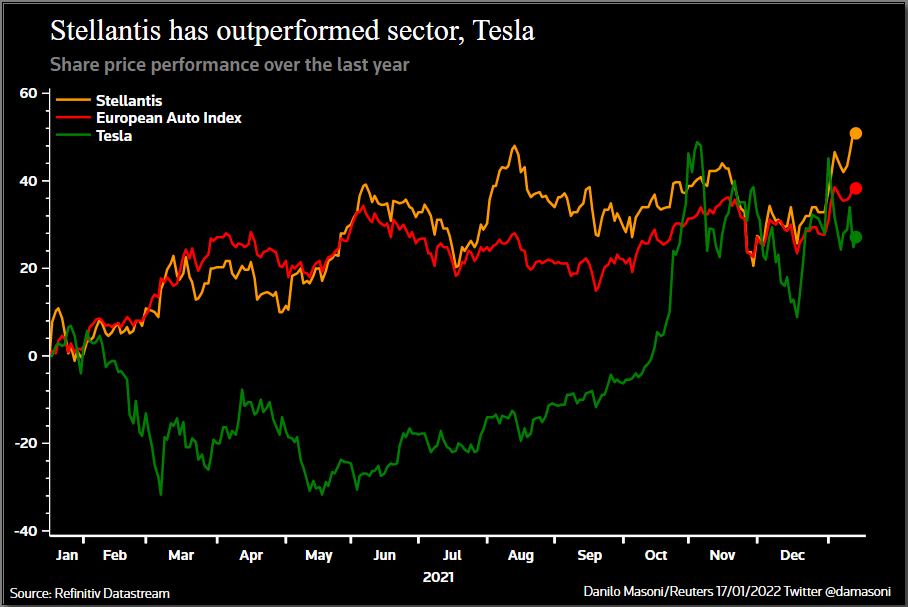 Jefferies analysts state that Stellantis had a strong first year, since its merger of Italian-American automaker Fiat Chrysler and France’s PSA. However, says that Tavares has shown vision and ambition with a “sustained stream of strategic initiatives.”

Tavares has mapped out a 30 billion euro electrification strategy, along with alliances with iPhone assembles Foxconn and Amazon. They are also focused on accelerating the development of software and semiconductors for future connected vehicles. There are also plans for five battery plants along with deals with the European labor union. This strategy to align with the union pushes the company operating profit by 10%. It has largely benefitted the company during the semi-conductor shortage.

Other challenge for the company would be managing both external and internal competition. That is in reference to the production line including 140 brands like- Jeep, Ram, Citroen, Opel and Maserati. As Tesla has been leading the electric vehicle segment it is important that a company like Stellantis with many brands under its umbrella, that they lead in the market. Tavares has said every aspect of the group is under the microscope, including its brands, some of which analysts have suggested could be eliminated to save money. He stated, “For the time being, we love them all and you cannot kill what you love. When you love them, you give them a chance.”