Steve Cohen, a billionaire fund manager, and New York Mets owner spoke at the SALT conference about why he has a personal and financial interest in the cryptocurrency industry. Steve Cohen now supports the crypto industry. This is interesting since it comes after years of him disregarding the space. 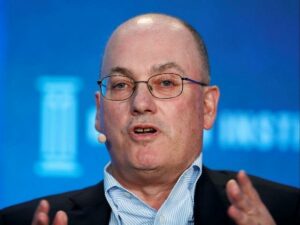 Cohen’s Transformation from being Skeptic to Supporter

According to reports, Cohen claims that his “crypto fanatic” son persuaded him to look into the business more. He’s spent the last few months meeting knowledgeable people and learning as much as he can about technology and its potential.

“Once I decided there were opportunities, and I thought this could be a space like Internet — it could be incredibly transformational and I wasn’t going to miss this”- Cohen noted at the ‘Generating Alpha Markets in Baseball’ discussion’’.

The billionaire has now made a personal investment in the sector. He invested his own money in Radkl, a quantitative trading firm for digital assets, and his family office invested $50 million in Recur, a Metaverse development firm. Cohen’s interests, surprisingly, are in the cryptocurrency business as a whole, rather than any specific token. In fact, he dismisses the very first one outright.

In a recent interview, Steve Cohen stated, “I don’t care about Bitcoin.” “I’m more interested in the blockchain technology itself, and how transformative and disruptive it may be.”

Cohen isn’t the first high-profile investor to change his mind on digital assets. After advising investors to “get out” of Bitcoin in 2018, Jordan Belfort – dubbed “The Wolf of Wall Street” – suddenly believes that Bitcoin will hit $100,000 by the end of the year.

In an interview with Fortune, Belfort stated that he believes bitcoin has advantages over equities, such as its limited supply, which may lead to the cryptocurrency reaching $100,000. He also mentioned the surge in institutional investor interest for bitcoin since its previous bull run in 2017. He attributes his feeling of being “spoiled by Bitcoin” to the asset’s limited availability. In 2017, Belfort agreed with JPMorgan CEO Jamie Dimon when he stated that bitcoin was a “fraud.”

Even Peter Schiff admits Bitcoin may hit $100k by year’s end and that he should’ve bought some when he had the opportunity in 2011. However, unlike Cohen, Peter’s crypto fanatic son Spencer Schiff has not been able to convince him to take his help.

What do you think of this transformation of Mr. Cohen from being a Crypto skeptic to a crypto supporter?