Dogecoin’s price is declining towards $0.20

For the past nine days, Dogecoin’s price (DOGE) has been following a declining trend channel. Sellers are aiming for a profit of roughly $0.20, which falls in line with the September 7 low. 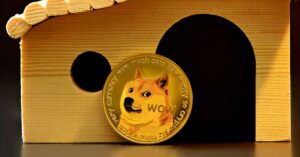 Since September 7, Dogecoin’s price has been moving in a negative trend channel. With the help of the 55-day and 200-day Simple Moving Averages, price action may have switched to the upside at the start of the DOGE trend formation (SMA). Price action has been drifting lower in the meantime, and both the 200-day and 55-day SMAs have now turned into resistance. DOGE bears now have two powerful forces working in their favor to drive prices lower. 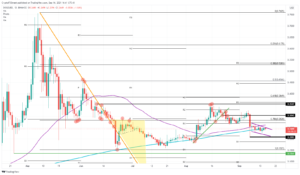 Buyers in Dogecoin, on the other hand, are attempting to push the price higher, with several tests of the descending trend channel’s upper trend line. Sellers are sticking firm and successfully defending their short perspective.

Expect sellers to take over market action and drive the price down toward $0.20 as the interest in DOGE bulls fades. That level was low from September 7 and will be the goal for DOGE bears looking to book some, if not all, of their profits on short positions.

Expect buyers to enter at $0.20 to begin accumulating long holdings in the handover from sellers who are profiting. If that level fails to hold, the monthly S1 support level at $0.19 is ready to step in.

DOGE bulls could use a fade trade to get long in a wider price range. Assume that the sellers are obstinate and refuse to allow any opportunity for the purchasers to enter. Expect a surge through S1 toward $0.15 in this case. That level is the same as the June 22 low.

Also read: Crypto could be subjected to the wash sale rule in the US