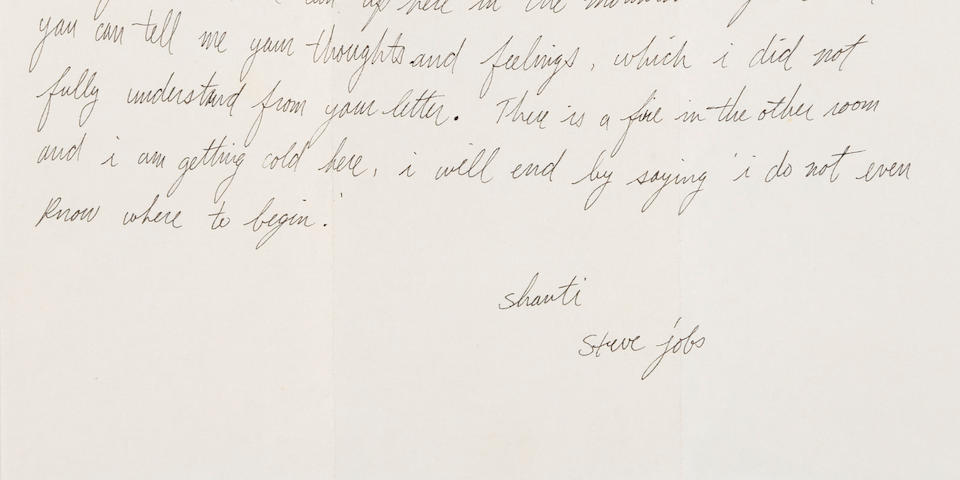 An auction has been set up for a letter written by Apple co-founder Steve Jobs. On November 3, British auction house Bonhams will auction a letter he wrote to a boyhood friend when he was 18 years old.

Jobs wrote the letter on his 19th birthday, February 23, 1974, and addressed it to his friend Tim Brown, just two years before Jobs and Steve Wozniak co-founded Apple.

Jobs’ views on Zen Buddhism are expressed in the one-page letter, as well as his desire to visit India for the Kumbh Mela, a Hindu pilgrimage and festival. According to the Bonhams website, the letter is likely to fetch between $200,000 and $300,000 during the auction.

According to Bonhams, the object is the first handwritten personal letter written by Steve Jobs to be auctioned.

Bonhams even took their official Instagram account to showcase the letter, the post reads, “Tim Brown, the recipient of the present letter, was one of Jobs’ closest friends.

In response to Brown’s letter sharing his thoughts on Zen Buddhism, Jobs claims not to understand (“I do not know what to say”), but then expresses great depth beyond his age (“… i have loved and i have cried many times. / somehow, though, beneath it all it doesn’t change….”).⁠”

Furthermore, while discussing the letter, Adam Stackhouse, Bonhams Director of History of Science and Technology, claimed that Steve Jobs was both a smart and complicated person, but that the genuine Jobs stayed hidden from public view.

He continued, “This letter provides a fascinating glimpse into the thought processes of one of the world’s finest innovators and businesses.”

“i will end by saying i do not even know where to begin,” was the last line Jobs said at the end of his letter to Brown. Before writing his signature at the bottom of the page, he wrote the phrase “Shanti,” which signifies “peace” in Sanskrit.

According to a CNBC article, Brown and Jobs both attended Homestead High School in Cupertino, California, where Apple is now headquartered. According to Brown’s LinkedIn page, the two friends kept in touch throughout their lives, until Jobs’ death in 2011.

A handwritten job application by Steve Jobs was previously auctioned at the start of this year. He is claimed to have written the 1973 handwritten application about the time he dropped out of Reed College in Portland, Oregon.

In 1974, Jobs joined Atari, where he met Steve Wozniak and eventually formed Apple. According to auction house Charterfields, the one-page questionnaire gives no indication of the position he was looking for or the firm he wanted to work for. From February 24 to March 24, the questionnaire was placed up for virtual auction.