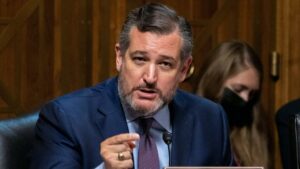 President Biden signed the $1.2 trillion package, which is expected to add at least $340 billion to the federal deficit, spend substantially on unpopular modes of transportation, and fund climate change programs. The omnibus package, on the other hand, includes provisions that strengthen federal oversight of Bitcoin.

“Over the next five years, the plan will infuse $550 billion in additional cash into transportation, telecommunications, and utilities,” according to CNBC. It also represents half of Biden’s domestic program, paving the way for the second half, a $1.75 trillion social spending and climate change bill, to be passed.”

When the bill was debated in the Senate in August, some members pointed out that the bill’s definition of the term “broker” was vague. “Further explanations are needed to ensure the digital asset ecosystem may continue to expand and prosper,” Chamber of Digital Commerce President Perianne Boring urged officials.

Ted Cruz calls for reversing Infrastructure Bill’s crypto crackdown. Cruz expressed concern at the time that the plan would “force every single player in the cryptocurrency structure to act as a financial institution,” which would require them to give consumer information to the IRS even if they didn’t have access to it. As a result, he proposed an amendment to clarify the terminology and protect the fledgling blockchain industry.

Cruz developed legislation to repeal the “overly broad and poorly-crafted provision from the infrastructure package that imposes new reporting requirements for many participants in the blockchain business” after the measure was signed into law.

“The Lone Star State has quickly established itself as the primary hub for the cryptocurrency business, and that fascinating industry is now in danger of being suffocated and forced overseas by an overreaching clause in this newly-signed, reckless spending bill,” Cruz said in a statement.

“I urge my colleagues in the Senate to repeal this harmful language that will create regulatory uncertainty and in turn an unnecessary barrier to innovation,” he added.

As of Wednesday, cryptocurrencies have a global market capitalization of $2.63 trillion, with Bitcoin alone valued at $1.14 trillion. Meanwhile, some legislators have expressed an interest in enacting federal laws governing the Bitcoin sector.

Senator Elizabeth Warren (D-Massachusetts) asked Treasury Secretary Janet Yellen in July to consider “the risks that cryptocurrencies represent to investors, consumers, and the environment in the absence of adequate regulation in the United States.”

“The longer the US delays to create the correct regulatory regime for these assets, the more probable they will become so enmeshed in our financial system that there may be potentially significant implications if this market becomes stressed,” she said.