“Many exciting things will be unveiled on Battery Day 9/22”, Elon Musk tweeted on September 11.

Elon Musk is many things but for Tesla, he is the CEO and Product Architect. Tesla has been known for its innovations in technology, an industry leader in advancing from the basic Lithium-Ion batteries in electric cars to provide more battery life.

The Tesla Battery Day Event will be exciting as promised by the CEO to see what new technologies would the company bring on ground, this time.

This event was planned for April 2020 but due to the unforeseen COVID-19 Pandemic situation, it had to be postponed till September. 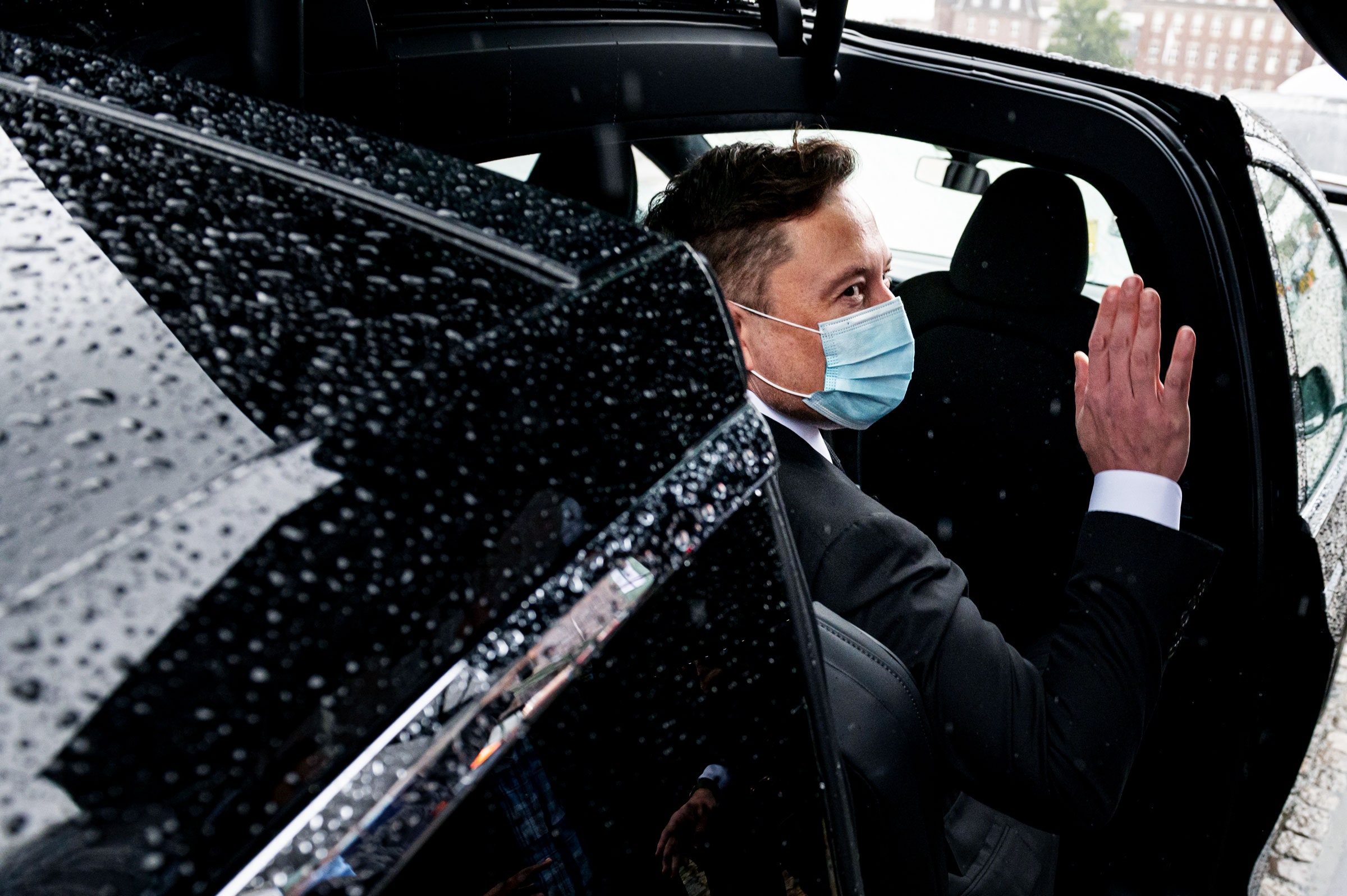 Musk is surely known to set very high hopes and expectations for its audiences but the Billionaire CEO always meets his deadlines, there are always more ideas and innovations rolled up his sleeve which he unveils when it is a little better than perfect. So here are some rumours and speculations suggested for the big event by some experts in the field. Let us see what new products could be expected:

However, Musk has previously criticized Panasonic for their poor battery production rate, saying that it constrains the production of their electric cars. There has been a shortage of battery cells at Panasonic- confirmed by CEO Kazuhiro Tsuga commenting that they would soon run out of batteries of Tesla continues to expand its electric cars business.

An effective business is always running in its efficiency and at the moment, Tesla is not happy with Panasonic’s efficiency at production. Does this mean Tesla could start producing its own batteries?

Speculations suggest that Tesla will announce in this event that they will start manufacturing their own batteries. In-house production would reduce their overall cost and enhance their efficiency in Tesla Model 3, Tesla Model Y and future project’s production.

There has been news about recent acquisitions, spec sheets, patent applications and photos from Tesla that point towards this new change in the multi-billion-dollar company. 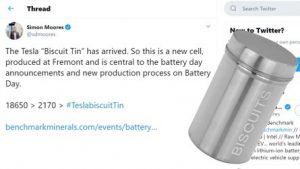 Recently, a bunch of photos from Tesla’s supposed in-house battery production were leaked on the internet. The batteries seen were said to be from Tesla’s Secret ‘Roadrunner Project’. The visible batteries in the pictures are twice the size of Panasonic’s 2170 cells which also suggests, higher capacity. This production is suggested to cut down on the company’s cost as they remove the tab which was a connection between the Panasonic battery and what it was powering.

Benchmark Mineral Intelligence analyst, Casper Rawles called these new batteries as “The Tesla Biscuit Tin” because that is what it looked like. This new production by Tesla will bring down the manufacturing cost of the vehicle and could be evenly priced with other gas-burning vehicles in the market.

Tesla has been working on its “Million Mile Battery” and rumours suggest that the company will reveal major updates and advancements of this project in this ‘Battery Day Event’.

This project is all about making a battery that can last a million miles before needing to be replaced.

According to reports, this new ‘ million-mile’ battery would be manufactured by Tesla and Amperex Technology Limited (CATL), a contemporary for the company and a battery giant in the industry. It was also reported that Tesla may use CATL’s Li-Ion phosphate batteries in its new cars because it does not contain cobalt which is known to be the most expensive metal in Electronic Vehicle batteries.

This battery will certainly reduce the company’s cost per Kilowatt-hour and soon these electric cars could be sold at a lower price, same as any gasoline driven ones, making EV more affordable.

How much time does to take to cover a million mile?

A company with multiple innovations must patent their technology to save their USP.

In 2019, December- Tesla filed an application to patent “dioxazolones and nitrile sulfites” which act as electrolyte additives for lithium-ion batteries.

The application of such a battery would result in longer-lasting power, cost-reduced cheaper batteries and better than a normal Li-ion battery to be used for electric cars and other electric products.

In July, there was another patent application filed by the company for ‘single crystal’ nickel-cobalt-aluminium electrode (NCA). This is not a regular battery electrode system; the basic ones use nickel-manganese-cobalt electrodes.

According to the Journal of Electrochemical Society, A single crystal cathode will have the capacity to power an electric vehicle for approximately 1 million miles i.e. 1.6 million kilometres. This technology could help Tesla to achieve their goal for a ‘million-mile battery’.

Another patent was filed by the company for “tables” batteries, the same one that we called a biscuit-tin battery. According to Musk, this type of battery is essential for design improvements and a tables cell has bumps and spikes which allow the different layers of the cell to be connected without the use of welding which would make it inefficient and Musk surely does not want that.

Sometime back in 2018, Musk tweeted that Tesla uses less than 3% Cobalt in their batteries and next-gen vehicles will have zero Cobalt percentage for a safe environment.

The Battery Day Event could be that stage where Musk announces this good news to the world.

Cobalt is factually the most expensive component of a battery and developing technology without its use could make the overall costs cut down. Cobalt is also commonly known as the ‘blood diamond of batteries’ because mining this element is an extremely tough task. The mining conditions may often violate several human rights. This is the reason, Musk decided to get rid of cobalt completely and using a more efficient cobalt-free battery. 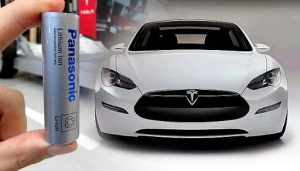 As of now, Tesla has been working with the mining industries to find and source sustainable cobalt, according to a publication. Tesla will be working with Cobalt for some time until it announces a cobalt-free battery use, more likely on the 22nd September event.

Tesla factories are called Gigafactories because it produces ‘gigawatt-hours’(GWh) of battery capacity. During an early earnings call, the billionaire CEO hinted on the possible future manufacturing footprints of the company to be called as “Terafactories’.

Terafactories imply 1000 GWh of battery capacity that is almost 20 times more capable than the current batteries with higher capacity and efficiency. Tesla’s current Gigafactory is located in Nevada and it manufactures Panasonic’s battery cells.

Back in 2018, Tesla acquired Maxwell Technologies in a deal worth $218 million. This company had mastered the innovation of dry electrode technology which was more environment friendly than Panasonic batteries. This battery caught Musk’s attention as this technology eliminated solvents in a battery cell through which the current flows.

Tesla says in a statement that this technology could be applied in various chemistries and is more cost-effective and efficient than wet electrode technology, previously used by the company. 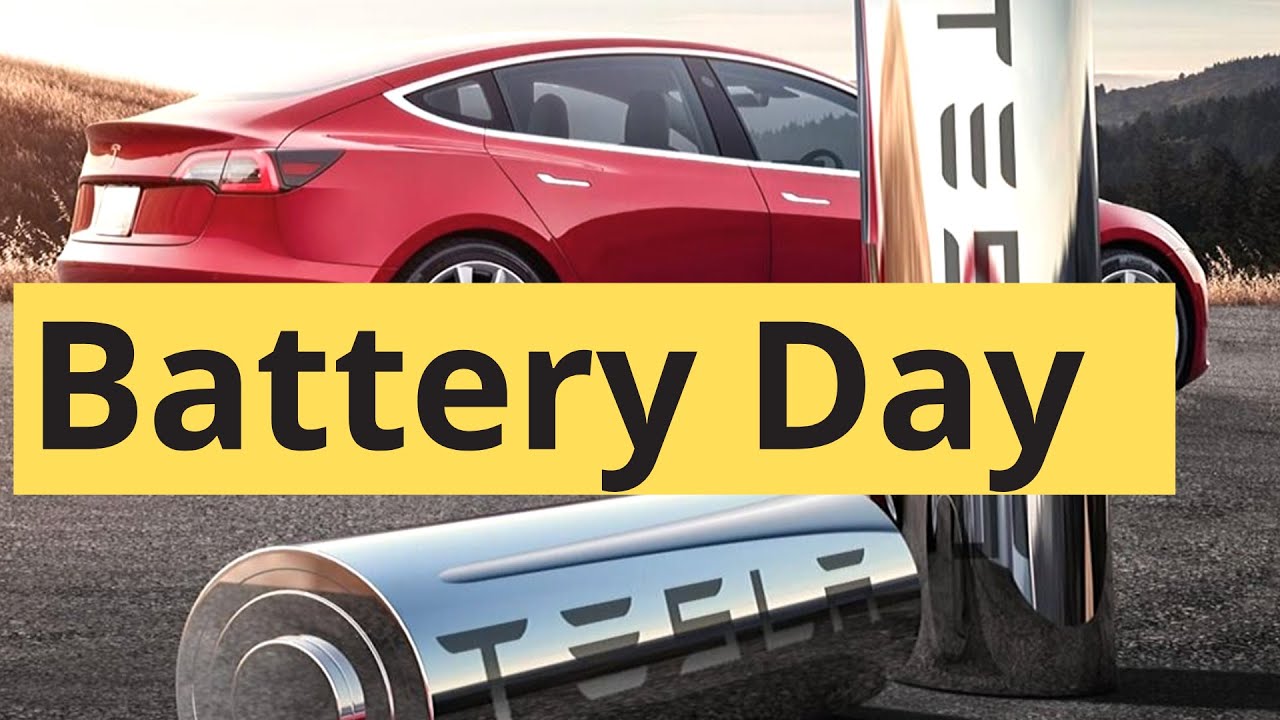 According to Bloomberg Columnist, Matt LeVine, Elon Musk is a nothing if not a showman, he is aware of what the techno beasts want and he feeds them exactly that.

Tesla’s public presentations have been using the “One More Thing” trademark and people are not sure what to expect from the Battery Day Event.

Elon Musk is a billionaire, philanthropist, a business magnate and an industrial designer. A person this successful must know about his competitions in the market.

QuantumScape backed by Bill Gates and Lucid Motors are Tesla’s top contenders. Both these companies have been successful in creating technologies that range 20%- 30% better than Tesla.

Manufacturing Electric Vehicles is no longer the only aspect considered by the tech billionaire. Other motor manufacturers such as Volkswagen and Ford are infusing millions of dollars in their EV development plant and batteries are a major component when it comes to Electric Vehicles.

The Tesla Battery Day must be about Musk saying…Not so fast!