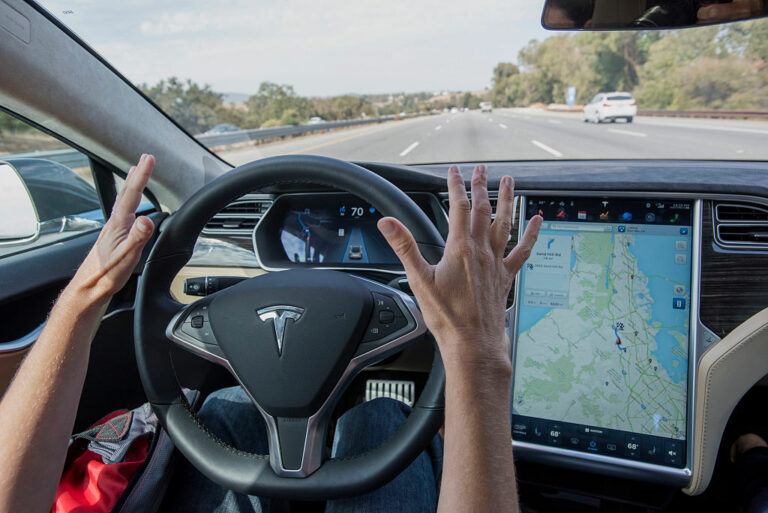 A member of the media test drives a Tesla Motors Inc. Model S car equipped with Autopilot in Palo Alto, California, U.S., on Wednesday, Oct. 14, 2015. Tesla Motors Inc. will begin rolling out the first version of its highly anticipated "autopilot" features to owners of its all-electric Model S sedan Thursday. Autopilot is a step toward the vision of autonomous or self-driving cars, and includes features like automatic lane changing and the ability of the Model S to parallel park for you. Photographer: David Paul Morris/Bloomberg via Getty Images
Home
Cars

Tesla’s camera-based monitoring system was released in the Full Self Driving update that was released in August. Now after trying it out and reporting about the technology Consumer Reports states that the system failed to keep driver’s attention on the road.

There is an MIT study issued in October saying that Tesla drivers become inattentive once the autopilot is activated. The research is based on 290 human-initiated AP disengagement epochs. While Consumer Reports also says a similar thing, it adds that General Motors Cruise does a better job at keeping drivers engaged. CR tested Autopilot on Model 3 and Model Y vehicles and found,

Which ended with a statement saying that drivers are less attentive when the autopilot is engaged. CR hasn’t tested Ford’s Blue Cruise yet and compared the attentiveness to GM’s Cruise. Also, they even tested BMW and Subaru’s driver-assist systems. BMW doesn’t allow the driver to go completely hands-free when the vehicle is using autopilot at speeds higher than 40mph. Meanwhile, Subaru’s driver-assist feature can detect driver distraction up to some extent.

Tesla’s recent updates have been much stricter and to the point. Where a driver reported that after 5 repeated warnings from the system, the FSD could not be activated again. Tesla safety scores also play a huge role in a driver using the autopilot. There is also a possibility that the CR users were generally testing it out and used the vehicles in an appropriate manner. Thus maintaining their safety scores.

There were also some complaints that the warning isn’t clearing immediately, thus being a hassle for drivers instead of encouraging them to be inattentive. It is unclear what is actually true about the Tesla camera-based monitoring system. But, as nothing major incidents occurred while CR was testing it out, Tesla’s driver-assist feature deserves the benefit of the doubt.