2022 Ideen Expo was held at the Hannover exhibition. It is a massive event where young adults, teenagers, and children come and visit. The workshops and exhibits feature various projects by notable exhibitors. Tesla also took part, bringing several projects to the expo. 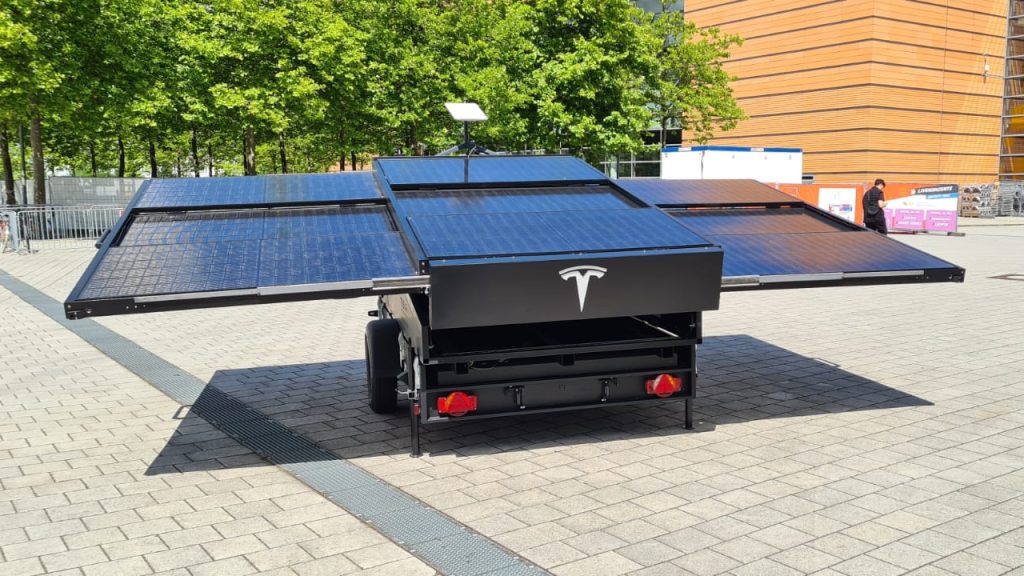 The projects include Model Y equipped with 4680 battery cells, which are to be rolled out in the near future from Giga Berlin. The most exciting project was a solar range extender trail, along with a Starlink dish. It was observed by Tesla advocate Falk Melzer. The solar panels attached to the trailer were folded out, it seemed like they could provide decent energy to the vehicles. It appeared to be lightweight. As the battery pack was also attached, most of the weight could be from the battery pack itself. It is a prototype, for now, Tesla seems to be working on such interesting solutions.

SpaceX and Tesla being Elon Musk’s companies have often combined technology. Starlink dish to be used in the moving Tesla vehicles was also considered earlier. Elon Musk mentioned the solar extender product in the past, back in 2019 unveiling the Cybertruck. Back then, Musk noted that Tesla would probably build a range extender for the all-electric pickup in the form of a solar tonneau cover that can generate about 15 miles of range per day. The CEO added that the addition of fold-out solar wings could likely improve the Cybertruck’s daily range boosts to about 30-40 miles per day. And considering that the average distance traveled by drivers in the United States is about 39 miles daily, the additional range brought by the Cybertruck’s solar panels could definitely prove useful.

Ideen Expo is the perfect location for Tesla to showcase its projects that may or may not go to production. Many scientists, teachers, professionals, and other college institutions were present. Though the main exhibitions were by researchers and academics, many brands also took part in the event. Around 5000 to 20,000 visitors are known to have visited the exhibit.

Tesla is at the "IdeenExpo" in Hannover.

They brought a solar range extender trailer with Starlink.

And a Model Y with the 4680 structural battery pack.

Expo attendees who want a more hands-on experience could also get in the passenger seat and experience the launch of a Giga Berlin-made Model Y Performance. When Tesla shows off the instant torque of their quickest vehicles, they usually set up their light tunnel, as they did at the Plaid launch event, to enhance the effect of the blazingly fast acceleration. In Hannover, they went with a “greener” approach and used a pathway lined with trees for the same effect.