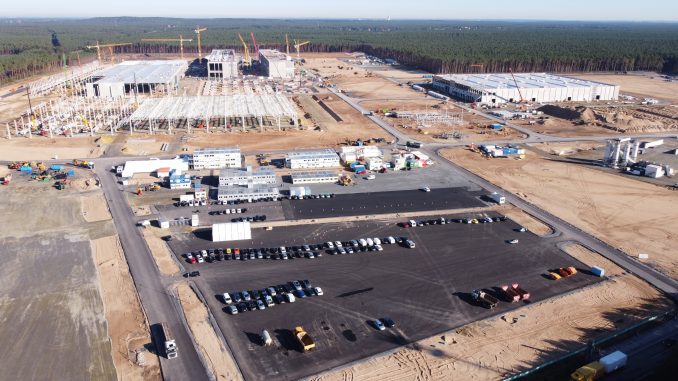 Tesla Gigafactory in Berlin has a new neighbor, Germany’s largest union, IG Metall. This office would make it easier for the workforce to attend Giga Berlin, which is expected to reach 12,000 once the facilities ramp up. The workforce from IG Metall has already announced that they would like as many people as possible to represent Tesla from their side. This is why the presence of an office nearby would enhance the facilities for Tesla employees to get their queries clarified or problems solved.

IG Metall district manager for Berlin, Brandenburg, and Saxony Birgit Dietze have noted that the presence of an office would benefit the workforce. It would ensure that doubts or clarifications or assistance in reference to employment contracts, job interviews, and everyday work, can be clarified. She said, “We have opened an office very close to the factory premises and are available to employees for any questions. Of course, we also support the works council election. And we are available for union questions: remuneration, length of working hours, shift issues, and so on,”

In November the news came out that Tesla was unionizing their workforce. So far, in the US and in China the company hasn’t used a union workforce. Back in 2017, the company ran to unionization by IG Metall but avoided it by giving its workers a salary raise. Germany has “worker’s councils,” which are basically unions for the workforce of specific companies. Unions, like IG Metall, are for entire trades and generally work directly with the worker’s councils.

Starting production by the end of the year

Giga Berlin received a lot of criticism and challenges while the factory was being built. Over the year the company overcame one by one, while the workforce change was inevitable. It could largely benefit the company in the end. Especially as things work that way in Germany. While Tesla was acquiring Grohmann Engineering in Prum, Germany the biggest critic was because of IG Metall. However, now the employees are looking forward to setting up the council.

Back in November as IG Metall was working to set up the workforce, it started with seven Tesla employees. Saying, “The IG Metall trade union said seven employees had taken the first step towards setting up a works council, planning to choose an election committee on Nov. 29.”

Dietze then stated, “A works council ensures that the interests of the workforce have a voice and a weight. This is in line with the democratic work culture in Germany.”