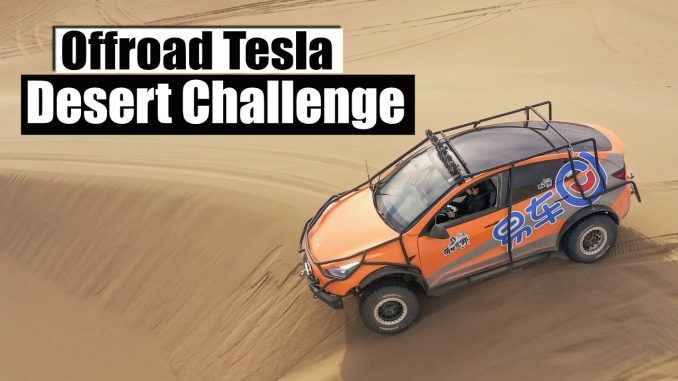 Bitauto Garage in China took a Tesla Model Y and modified it into an off-road vehicle. While most modified vehicles were in the US, but now they are being made in China as well. This vehicle was made with off-roading and desert Overlanding in mind.

It was specifically thought up with desert Overlanding and off-roading in mind. So they designed an entirely new suspension system for it and custom fabricated it. They even made their own upper and lower control arms. Also, they also lowered the front and rear traction motors, to reduce their angle with the lifted suspension, in order to reduce wear on them and increase their lifespan.

Furthermore, the next areas they tackled were the wheels and tires – they equipped the vehicle with a set of 32-inch General MT5 tires that in conjunction with the modified suspension now really stick out. They apparently made some custom fender flares for this vehicle, which just about cover the tires, although what they do most is make this Model Y look like a proper lifted truck.

In the second part of the video, they proceed to test the vehicle and while they do discover it is genuinely capable, they also find a couple of flaws with its design. For instance, even though they lowered the motors to give the CV shafts a more natural angle to work under, one still failed, when they tried to jump the vehicle.

If the big tires and the lifted suspension don’t drive the point home that it can go off-road, its builders also created an exterior cage to protect the vehicle from rock damage and even a potential rollover. This is probably the most extreme Tesla Model Y modified to go off-road and it looks like a well-made, well-thought-out project whose result is actually capable and it does not just look like it can.

There were some minor major needs that need to be adjusted and replaced. However, no major impact was seen by the end of the video. However, the notable downside was the range. It was less than 200 km per night, compared to the original range of around 500km, it was less. Going through the 500km desert with that range was rather difficult for the driver. Despite changing the vehicle in many aspects, the result did have some defects. Possibly, as more Tesla vehicles are transformed, they could be changed accordingly.