Tesla has always been known for its highly safe vehicles. And even though their cars come with their fair share of bugs or disputes as I might say, they are still one of the safest in the Industry. And most recently, the company’s Tesla Model Y vehicle received a 5-star rating in the NHTSA crash test. This a great news for users as well as the company as their vehicle just aced the most important safety test of the US. 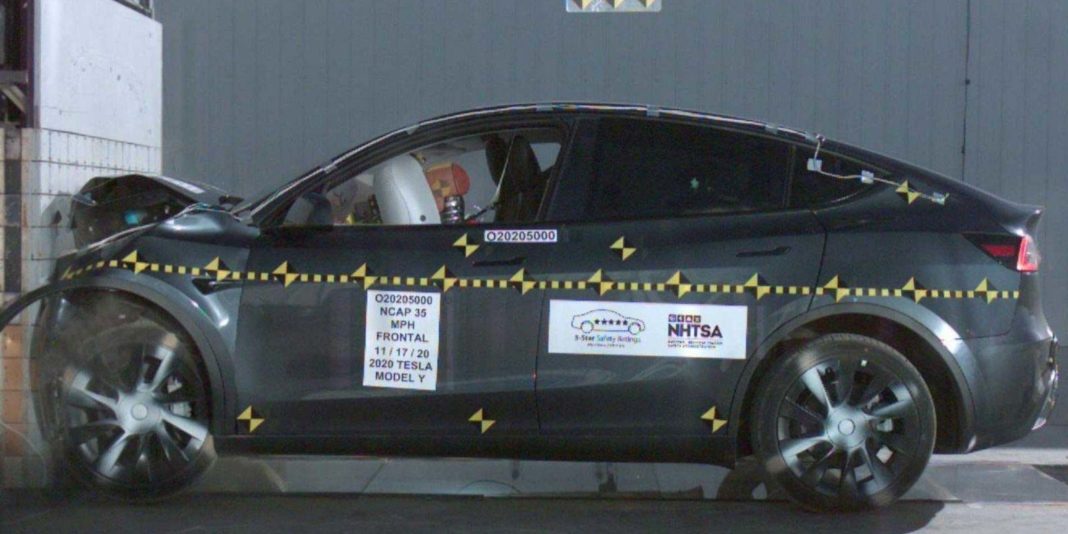 Like its other vehicles, the Model Y also aced the safety test. The National Highway Traffic Safety Administration tested the long-range model with dual motors from the company. But Tesla assures that the results will stay consistent for other models too. The car’s design and the side structure allow for minimal impact on the passengers on a crash. Additionally, the low center of gravity of the car reduces the roll-over risk by a huge margin. In fact, the vehicle has the lowest roll-over risk in any SUV ever. The car has been based on Model 3, so it is bound to perform well, seeing how good the other one did.

Tesla Model Y been designed to keep the safety of passengers the 1st priority. Since it is an SUV, the car has several zones in the car that help in distributing the force if any crash happens. It has one of the best crash energy management in the industry. Apart from the hardware and design side of things, Tesla has also focused on software to make the car as safe as possible. Some of these include forward collision warning, blindspot management, automatic emergency braking, and more. The car also makes sure that the drivers are active when the car is on the road.

Just a few days back, 1,58,000 units of Tesla vehicles were recalled in the US over a safety issue. The model of the vehicles was Model S and X manufactured between 2012-18 and 2016-18, respectively. According to the investigators, the issue was regarding the media panel of the cars. The failure of the media controls resulted in the loss of access to the car’s rear camera. It also resulted in the autopilot system’s failure, a problem in the windshield defogging system, driver sensing units, and more.

The US regulators have asked the company to provide an explanation for the entire fiasco by 27th Jan 2021. And it has also asked Tesla to provide a solution to the owners of the defective vehicles. And even though the company is not bound to do so, they should.

What are your thoughts on the Tesla Model Y acing the NHTSA safety test? Do let us know in the comments below. Also, if you found our content informative do like and share it with your friends.

Also Read: Mercedes-Benz is not worried about Tesla’s entry in India