The Boring Company under Elon Musk to accept cryptocurrency “Dogecoin”

It was not long ago, when Elon Musk made a tweet about bitcoin, saying that bitcoin was accepted in Tesla. Since then, bitcoin has seen growth like no other crypto currency. IT is fair to say that, Elson Musk had to play a major role for Bitcoin to reach at the stature it is today. Not only that, Elon Musk has been keenly observing the cryptocurrency market ever since it emerged. The current market situation also worried Elon Musk to a large extent. It would be a justifiable observation to make that, Elon Musk, more or less, is one of the pioneers of cryptocurrency, that gave the market the required branding and awareness.

Since Elon Musk’s bitcoin tweet, he never again commented about acceptance of any other bitcoin in his company. But that’s the thing of past. Recently, Elon Musk made a tweet saying that Doge Coin will be accepted in his company.

Lets look at a tweet put up by Elon Musk.

It is clear from the tweet that, Elon Musk wants to support Dogecoin and in his attempt he has given the cryptocurrency clearance to be used in The Boring Company.

Technically, The Boring Company, under Musk has its operations set. Loop, is a service provided by TBC which essentially enables people to travel in Tesla vehicles that are driven by humans at a speed of 35m/hr. The Loop is a significantly scaled down version of high occupancy vehicles moving at 150 mph. The Boring Company has also envisioned about Hyperloop, which essentially is automated driving and travelling at a higher speed.

The New payment option for Loop. 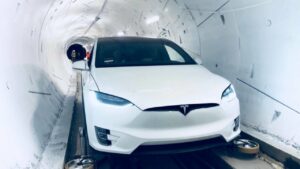 The Boring Company unveiled its first Loop station outside the Las Vegas Convention Center on Friday, adding to its existing three stops. At this time, the public first learned about the new payment method. It’s also the most recent time Musk has supported Dogecoin, a cryptocurrency whose value has fallen dramatically over the past year. Over 50 stations on the Las Vegas Strip, including casinos, hotels, and Allegiant Stadium, home of the NFL’s Las Vegas Raiders, are among the locations The Boring Company eventually hopes to reach. The expansion plan in Clarke County, Nevada, was approved last year and won’t cost tax payer money.

Currently, rides on Loop are free, but the firm does not yet know when it will start charging. Single rides cost $1.50, and day passes are listed as being $2.50 on the Vegas Loop website. By scanning a sizable QR code on a wall, riders at the new Resorts World station may purchase a ticket.