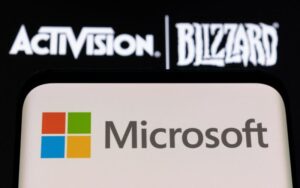 On Wednesday, July 6, the antitrust watchdog of Britain stated that it had initiated an investigation on a deal from Microsoft Corp. This was the deal the tech giant signed to purchase the game maker Activision Blizzard Inc earlier this year.

According to the Competition and Markets Authority- CMA, it had until  September 1 to make the phase 1 decision regarding this. It had till then to decide on if the deal between the US tech giant and and the video-gamer maker Activision would lessen the competition in the country.

The general counsel and corporate vice president of Microsoft Corp, Lisa Tanzi gave a statement on the situation. He stated how the company was committed to give answers to questions from the regulators. He added how Microsoft holds the belief that a thorough review would aid the deal close ‘with broad confidence,’ stating that it prove to be ‘positive for competition. Tanzi mentioned how the company expects and considers it appropriate for regulators to take a closer look into the acquisition.

“We expect and think it’s appropriate for regulators to take a close look at this acquisition,”

When approached for a comment, Activision has not acknowledged any requests as of now. The deal between Microsoft and Activision came across as the biggest deal in the gaming industry. Reportedly the CMA was also investigating Amazon over the retail giant’s use of data from third party sellers

In January this year, the tech giant announced that it was set to purchase Activision Blizzard. As specified by Refinitiv data, the deal between the two parties would be the biggest all cash acquisition on record till now. The phase 1 investigation by the Competition and Markets Authority would lead to the deal being cleared or will lead a phase 2 review that could be be even more in depth.

The approval of the deal significant implications for the video game industry worth $190 billion. Essentially, handing the control of the extremely lucrative franchises such as Candy Crush, Call of Duty and Warcraft to one of the significant tech companies of the world.

Microsoft hopes that the acquisition would aid it in the competition to build the metaverse. Moreover, various other companies are also fighting for a role in the virtual reality, which includes Meta Platforms Inc and Sony. Unfortunately, analysts appear rather skeptical about the chances of the deal gaining the regulators’ approval.