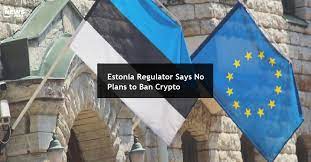 The Estonian regulator says it has no plans to ban crypto

The Estonian Ministry of Finance announced on Sunday that new law legislation for virtual asset service providers (VASPs) will not prevent customers from owning or trading cryptocurrency, but the proposed requirements for VASPs, which include high capital requirements, may apply to decentralized wallet creators.

”No plans to ban crypto”, says  the Estonian regulator

”No plans to ban crypto”, says the Estonian regulator. Following reports that the planned measure will effectively ban decentralized finance (DeFi) and non-custodial wallets, the White House issued a statement on Sunday. With a non-custodial wallet, users have complete control over their crypto and private keys.

Offering a non-custodial wallet in Estonia comes with a fine up to €400,000 pic.twitter.com/NiJSqIdKhW

The mentioned tweet was in reference to new guidelines outlined in a draught bill passed by Estonia’s Parliament on December 23. Estonian Finance Minister Keit Pentus-Rosimannus stated in a statement that the measure is intended to tighten anti-money laundering (AML) standards for VASPs, namely to reduce the creation of anonymous accounts. If the bill passes, Estonian VASPs will be required to identify their customers when opening accounts or wallets.

“This implies that the legislation contains no provisions prohibiting customers from owning and exchanging virtual assets, and it does not force users to give their private keys to wallets in any way,” according to the statement.

The Ministry also released an information page on Monday that answers frequently asked questions regarding the proposed bill. The proposed bill is Estonia’s response to the Financial Action Task Force’s (FATF) guidelines on regulating VASPs, according to the Ministry.

“The proposals are essentially tech-agnostic.” We govern the services offered, not the technologies themselves. The goal is to regulate VASPs in the same way that financial services are regulated, according to Märt Belkin, a spokesperson for the Ministry of Finance, in an email to CoinDesk.

The Estonian Financial Intelligence Unit (FIU), which began licensing VASPs in 2017, was criticized for being excessively lax with its initial licensing standards for crypto service providers, according to the journal.

More than 1,000 crypto companies had their licenses revoked by the FIU in 2020 due to insufficient links to Estonia. An Estonian-licensed VASP must either operate in Estonia or “have a proven connection” to the country, according to the new law.

According to the Ministry, the obligation for VASPs to collect identifying or know-your-customer (KYC) information from users is not new, but rather builds on an existing 2020 limitation on the creation of anonymous virtual accounts.

Users of private wallets that were not set up through an Estonian VASP are not “directly affected” by the proposed laws. Individuals can still utilize non-custodial wallets, according to the publication.

DeFi apps are not VASPs in and of themselves, according to the FATF recommendation, but “creators, owners, operators, or other persons who maintain control or substantial influence” in DeFi arrangements can be considered VASPs.

The Ministry reaffirmed that no services will be prohibited and that businesses who “want to provide such services in Estonia” must merely follow AML regulations. The bill must now be passed by Parliament before it can take effect, which is expected to be in the first part of 2022.