The Football Mind: A fast growing specific functionality based site for all football entities

“We are extremely passionate about the game of football and wanted to create specific functionality based site for football entities” say Pranesh Krishnamurthy, the founder of The Football Mind. “Due to the level at which this sport is played nowadays and the monetary stake, the diversity of people involved is large. To cater to such a varied audience is a huge task and currently there are websites that serve a section of these entities. Most of these people currently use popular websites like Facebook and Twitter for their communication. Specific functionality based sites for football entities do not exist currently”, he adds.

Pranesh Krishnamurthy started The Football Mind with his childhood friend Rohit Narayan in Pune in 2013. The site aims at connecting various entities related to football such as professional players, clubs, coaches, academies and even legal bodies with each other and with the masses.

India today has an audience of over 80 million for this sport. Cities like Pune, Mumbai, Kolkata have anywhere between 100 – 300 professional football clubs that are associated with the All India Football Federation through various district and state federations. Through this venture, Pranesh and Rohit plan to help different football entities connect with the right individuals who will help them run their operations better. They also plan to help regional clubs generate local support by connecting with the right target audience. 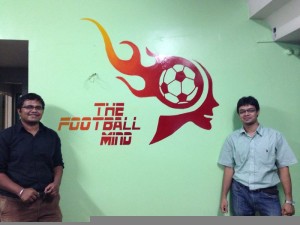 Rohit and Pranesh (from left to right) in their office

The Football Mind which started with 2 founders in 2013. In mid 2014, they were joined by Rahul Rane, their third partner. Rahul is a serial entrepreneur and has started ventures such as Connasys, a software design and development company and Megavenues.com, a marketplace for event venues that allows venue owners to list their properties and enables users to search and connect with them instantly. The Football Mind now has a team of 10 people working in various departments like development, design, marketing and social media and operates from Mumbai and Pune.

Pranesh and Rohit both are engineers and have been friends since the age of 5. Prior to starting The Football Mind, Rohit has an experience of working in the Automotive testing sector whereas Pranesh has worked in the energy sector.

Rohit and Pranesh started off by working closely with the football scenario in Pune, working their way around teams, clubs, players and gaining insights to see how they can make their service helpful. They took to blogging to create a network of various football entities and then started helping in organizing tournaments. Once they felt they had done enough ground work, they immediately quit their jobs and took to this venture on a fulltime basis.

In the coming few months they plan to roll out the first phase of their networking model and start officially enrolling professional entities on the site. They also plan to start E-Commerce portal which will cater to selling football merchandise among other things.