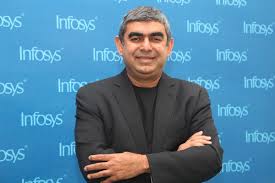 Vishal Sikka strategy at Infosys – ‘The Times They Are Changing’.

For an industry which is working hard to become as customer focused as possible and trying to provide their clients with solutions which they could not have found on their own, Vishal Shikka, the man known for his customer engagements during his time at SAP, is seen as a perfect CEO for Infosys.Being based out of California will give Sikka a chance to work closely with Infosys clients (60% of Infosys revenues come from the US). Sikka is said to have met a number of Infosys clients already. Although Sikka will be based out of California, he will be working out of the Infosys headquarters in Bangalore for “atleast a week” every month.

On the day Sikka was named as the CEO of Infosys, 12 senior executives were elevated to the position of executive vice president. This move was done with intent to stop the senior level exodus that Infosys has witnessed in the last few months.

On July 2014, Sikka connected with over 160,000 Infosys employees asking them what was the main area of innovation that their clients were focusing on. In the first week after he took over as the CEO, he approved the promotion of 5000 employees.

A definite focus on innovation

In an effort to create a culture of innovation, Sikka made sure that 20 of his top employees got an insight into design thinking in the first 2 weeks as his appointment as the CEO. Sikka has had multiple meetings with venture capitalists seeking their views on get the company to work on its  innovation agenda. Being based out of the Silicon valley, which is a home to some of the most disruptive technology startups, also gives Sikka an added advantage to recruit, work closely with and make investments in companies.