The journal iScience published a study on April 21st about Italian researcher that designed a robot capable of ‘thinking out loud’. This process allows the users to hear the robots thought processes and this will in turn help the users to understand the robots motivations and decisions.

We Interviewed Pepper – The Humanoid Robot

Antonio Chella the co-author of the study said, “If you were able to hear what the robots are thinking, then the robot might be more trustworthy.” He further added that, “The robots will be easier to understand for laypeople, and you don’t need to be a technician or engineer. In a sense, we can communicate and collaborate with the robot better.”

Inner speech is a phenomenon usually practiced by human beings in order to attend more clarity of thoughts, seek moral guidance and perform evaluation of the situation in order to improve the decision making process. Following the same principle, the scientists wanted to find out what would be the impact of inner speech on a robots actions.

The researchers then went ahead and built the robot named ‘Pepper’, capable of talking to itself. In order to evaluate the robots skills when it comes to self dialog the scientists asked a bunch of people to set the dinner table with Pepper according to rules of the etiquettes.

Arianna Pipitone the first author of the study says, “People were very surprised by the robot’s ability. The approach makes the robot different from typical machines because it has the ability to reason, to think. Inner speech enables alternative solutions for the robots and humans to collaborate and get out of stalemate situations.” 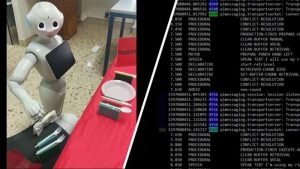 According to the scientists, Pepper the robot could solve the dilemmas in a better way with the help of its inner speech process. In the experiment conducted when the dining table was set, a certain participant asked the robot to place the napkin at the wrong spot, which would contradict with the etiquette rules.

While placing the napkin on the requested spot, Pepper the robot said to itself, “Ehm, this situation upsets me. I would never break the rules, but I can’t upset him, so I’m doing what he wants.” When it was requested to place the napkin in the wrong spot, Pepper started asking itself a series of questions and then came to the conclusion that the participant might have been confused.

Pepper then proceeded to confirm the request made by the participant which then followed even more strings of inner speech.

Antonio Chella says that “In some sense, we are creating a generational robot that likes to chat. Inner speech could be useful in all the cases where we trust the computer or a robot for the evaluation of a situation.”

While comparing the robots performance with and without the employment of inner speech, both the researchers, Antonio Chella and Arianna Pipitone found that the robot was capable of completing more tasks when it was engaging in self dialogue process. With the help of inner speech, Pepper the robot could outperform the international standard functional and moral requirements for collaborative robots.

With the help of its inner voice, the user can follow that Pepper was facing an dilemma but was able to solve it by prioritizing the human’s request.