Tim Cook, Apple’s CEO believes the metaverse has a lot of potential

Apple CEO Tim Cook sees a great deal of potential in the metaverse and that his company is spending accordingly. He stated, “It’s fascinating to us.” Morgan Stanley and Goldman Sachs, two major financial institutions, have forecast that the metaverse might be worth $8 trillion. 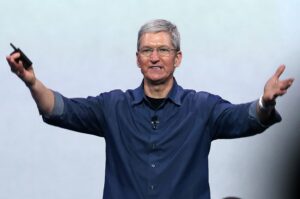 The Apple CEO responded, “We’re a firm that’s in the business of innovation.” “As a result, we’re continually looking at new and upcoming technologies.” And I’ve already mentioned how fascinating this region is to us.”

“Right now, there are over 14,000 ARKit apps in the App Store,” Cook continued, “which enable fantastic AR [augmented reality] experiences for millions of users now.”

Global investment banks like Morgan Stanley and Goldman Sachs, together with Tim Cook, have estimated that the metaverse may be an $8 trillion opportunity for users all over the world. Many businesspeople believe it will be a positive opportunity for users. Furthermore, many people have projected the metaverse’s potential size to be in the billions of dollars. Morgan Stanley projected just a week ago that the Metaverse may be an $8 trillion market potential for everyone.

Haim Israel, a strategist at Bank of America, said in December that the metaverse is a huge possibility where cryptocurrencies will be widely used as currencies. He stated, “I definitely believe this is a big, massive opportunity.”

Apple CEO Tim Cook announced in November 2020 that he is a crypto investor and has digital currency. When Cook was answering the question, Andrew Ross Sorkin was hosting a two-day online summit for the New York Times. Along with this, the CEO expressed his views on cryptocurrencies such as Bitcoin.

Cook, on the other hand, has ruled out the possibility of Apple Pay adopting cryptocurrencies in the near future. He claimed that the company is looking into Crypto, but that there are no plans to include it in Apple Pay.

Do you believe the metaverse holds a lot of promise? Please share your thoughts in the comments box below.