Tinder steps back from metaverse dating plans as business faces troubles Alongside, its CEO is set to leave after just serving for even less than a year. 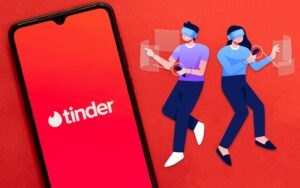 As Tinder parent Match faces a rather dull second quarter earnings, it makes a crucial announcement. It stated how it is diminishing the app’s goals for dating in the metaverse, getting rid of plans of offering an in-app currency called Tinder Coins. Alongside, Chief executive Renate Nyborg is also giving up her position after becoming Tinder’s first female head.

Previously, she had noted Tinder’s aspiring goals for the metaverse, as it took over the company Hyperconnect in 2021. Mainly, its focus lies on artificial intelligence, AR, video, with Nyborg referring to its ‘Single Town’ experience as means for Tinder users to use at some point to interact with people in the virtual reality.

On the other hand, the new CEO, Bernard Kim is now saying how it has indicated that Hyperconnect must retract. He stated how this was owing to uncertainties lying in the VR, along with its complicated working atmosphere. However, he specified how Tinder would go on evaluating the metaverse, and decide on the next step at a suitable point as they gain clearer idea. Moreover, Match Group noted how the loss of $10 million in the last quarter was somewhat because of the Hyperconnect takeover.

Additionally, a rather dull update regarding the Tinder Coins came about. This is the currency that the company thought would push more spending. Mainly, it would work in the way of rewards which it would distribute to users for their extensive use of the app, and it would allow its direct purchase. Further, it could be used to pay for premium features such as Super Likes.

However, the CEO specified how the Coins plans is also under reevaluation following a generation of varying results from its tests. As of now, Tinder has taken the decision to somewhat pause, and conduct a reexamination for its better contribution to its services. Though it planned to launch the feature widely later, it has only soft-launched yet, which was done earlier this year.

Despite its revenue being up in general, reports specify how the company’s profit did not match expectations of analysts, which was $795 million and not the expected $804 millions. Moreover, it predicts hardly any growth in revenue for the second half of the year. It noted how it witnessed a rise in activity in the app in 2021 owing to the distribution of vaccines. However, it is not exactly looking at such a rise this year.