According to famous Bitcoin bull Tom Lee, the hype surrounding a yet-to-be-launched US exchange-traded fund based on Bitcoin futures is so high that it might draw more than $50 billion in inflows in its first year. 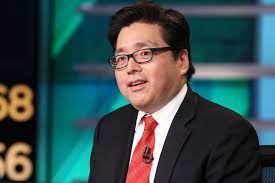 “We believe Bitcoin demand will outpace QQQ inflows,” said Lee, co-founder of Fundstrat Global Advisors, in a note released Monday. The Invesco QQQ Trust Series 1 fund, which tracks the Nasdaq 100 equities index, was mentioned by Lee. According to Bloomberg data, the two-decade-old fund has more than $188 billion in assets and is the fifth-largest ETF.

Despite the common assumption that the US Securities and Exchange Commission (SEC) is inhibiting the cryptocurrency industry’s expansion, Lee lauded the regulator for its ability to regulate the nascent market and protect institutional and individual investors from potential scams.

Institutions are attracted to a market that is well regulated, according to Fundstrat’s head of research. As a result, the SEC is actually helping. Nonetheless, the US regulator’s slowness may have affected the sector.

The establishment of an ETF, according to Lee, is the most essential achievement that will make Bitcoin appealing to institutions. He does not believe the SEC will approve a BTC-related fund anytime soon, however. The scale of the Bitcoin market is one of the reasons why the regulator is cautious. The oldest digital currency now has a market capitalization of less than $150 billion.

Lee estimates that a cryptocurrency with the largest market cap must be priced at least $150,000 to be liquid enough to underpin an ETF. An ETF is likely to generate close to 13 billion dollars of demand the first year, and that’s a massive demand imbalance to available supply Lee said.

For the time being, the SEC appears to be hell-bent on keeping Bitcoin ETFs out of the hands of US investors. Bitwise Asset Management proposed a Bitcoin ETF, which was rejected by the US financial authority earlier this month. Surprisingly, Bitwise executives indicated optimism that the SEC would approve the listing, which did not happen.

ETF providers, on the other hand, are not discouraged. Kryptoin Investment Advisors recently submitted an application with the Securities and Exchange Commission (SEC) to construct a BTC ETF that would mirror the CME CF Bitcoin Reference Rate. The firm is aided by a former World Gold Council managing director.