Today is a big milestone for Coinbase and an even bigger milestone for crypto. Thank you to our employees and customers for getting us here. Together, we can build the cryptoeconomy and create economic freedom for all. Join us for today’s events at https://t.co/kki68arv3O $COIN pic.twitter.com/Bvcu9R0otq

Coinbase, a cryptocurrency exchange happens to be one of the largest players and most renowned name in the crypto market. It would be right to acknowledge the fact that Coinbase has had an instrumental role in taking the cryptocurrencies to the next level and revolutionized the whole community of cryptocurrency. In an interesting development, as mentioned in the tweet, we can see that Coinbase has made its first Initial Public Offering.

Let’s see what role does Coinbase actually play in Crypto?

Considering an example, let us assume you are interested in purchasing a bitcoin. Factually you have two options to get bitcoins. Either you deploy sophisticated computer and mine the bitcoins solving complex math problems, or you buy it on an exchange. It is easy for anyone to guess that the first option is generally not viable. So, all we are left with is the option of buying it in an exchange. In such a scenario Coinbase comes into the picture. It helps the investor to trade between different crypto currency all across the globe without complexities. 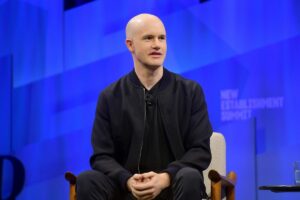 When a firm goes public, the executives and internal management who own a significant number of shares sell their stock. In the case of Coinbase, nothing unexpected happened. Since the firm went public, four top executives have sold $1 billion worth of Coin stock. At the time of selling, the shares were priced between $189 and $422.

The following is a breakdown of the value of the shares sold by the officials:

Loss in Value of shares.

Since the IPO, there has been a loss of value in the shares. The shares which roughly started trading at $381 reduced to $73 this year in April. There was an 80% drop in the value of shares. The crypto market implosion added salt to injury by dropping the values of the shares even more. After certain attempts to revive the market by various factors, the shares might see an upward trend if and only if the market is able to revive back to normalcy.