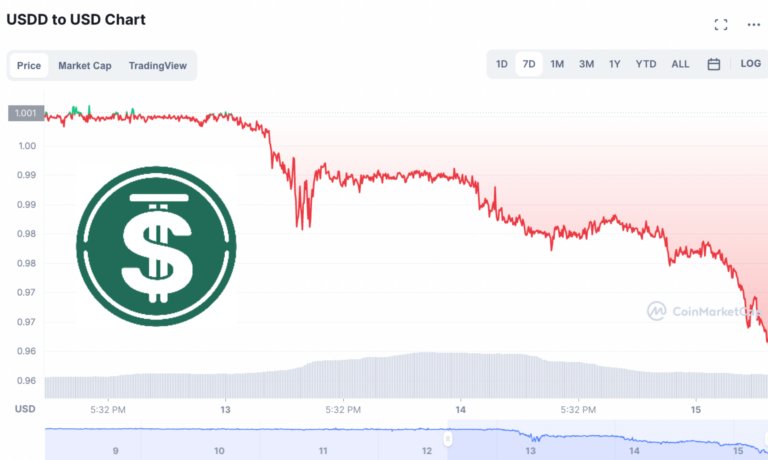 It looks like the saga of stablecoin crashes will not end anytime soon. First, we saw UST losing its dollar peg; it was followed by another stable coin called DEUS. And now, Tron’s USDD loses its dollar peg as the market sell-off continues. Justin Sun vowed $2 billion to protect its peg after the same happened.

Tron’s USDD is more collateralized than UST, but it has still lost its peg. Yes, the fall isn’t as drastic as UST, but you never know what happens next. Right now, the price has recovered to 96 cents after dipping to 91 cents on Monday.

Justin Sun, the founder of Tron, tweeted that a lot of people are betting against Tron and the shorts stand at around 500%. This is huge and is affecting the price of the token, so he will be putting in $2 billion in the market against the shorts. Otherwise USDD will be in a tough spot, as its price is maintained in a way similar to UST. That is by creating or burning TRX and USDD tokens.

To repeg USDD, it has to use a lot of its collaterals such as Bitcoin, USDT, and USDC need to be used. But will that be enough to save it? That isn’t easy to say. USDD’s similarity to UST will create huge panic among investors if it falls any further. Even after the peg broke, TRX has seen a huge price drop. In the last few days, the price of Tron has fallen by nearly 35% to $0.04907.

The problem with USDD’s design

Just like UST, investors can take advantage of the arbitrage opportunity as USDD has lost its peg. Swapping 1 USDD for 1 TRX then can make the difference in profits. This can become a loop and lead to a crash, just like UST. However, a good thing here is the collateral that backs USDD is much higher than UST. The collateral ratio is currently at 248.33%, which means the peg can probably be restored.

What are your thoughts as Tron’s USDD loses its dollar peg? And do you think that due to the high collateral ratio, they will be able to repeg it? Let us know in the comments below. Also, if you found our content informative, do like and share it with your friends.