‘TrumpCoin’ discovered by Trump family, legal action to be taken

Members of the Trump family have taken notice of a meme coin known as TrumpCoin, and they are not amused. Eric Trump, Donald Trump’s son, tweeted today that TrumpCoin is unrelated to the Trump family, that it is not sanctioned, and that “legal action” will be done.

Fraud Alert: It has come to our attention that someone is promoting a crypto currency called “TrumpCoin” (Symbol “TRUMP.”) This has NOTHING to do with our family, we do not authorize the use and we are in no way affiliated with this group. Legal action will be taken. 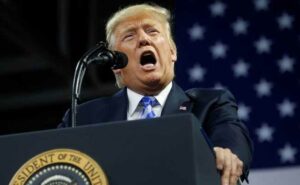 According to the TrumpCoin FAQ on its website, the cryptocurrency was founded on February 20, 2016, to honor former President Donald Trump. On its Twitter feed, it also refers to itself as the “#1 Patriot Cryptocurrency.” Currently, TrumpCoin has a market capitalization of roughly $1.5 million, with a circulating supply of just over 6.6 million coins. The coin has essentially no trading volume at the moment, though it did increase by more than 350% today, most likely as a result of Eric Trump’s tweet.

TrumpCoin uploaded a screenshot of their FAQ in reaction to the younger Trump brother’s Tweet:

TrumpCoin isn’t the only meme coin aimed at Trump fans on the right. NASCAR turned down the endorsement of “LGBcoin,” a parody coin, earlier this month. “Let’s Go Brandon” is an acronym for “Let’s Go Brandon,” a slogan that has become an internet meme and is used as a stand-in for “F*ck Joe Biden.”

A meme coin is a coin with no intrinsic value and, in many cases, no utility. These cryptocurrencies are primarily—but not exclusively—themed on internet memes, as the name implies. For example, Dogecoin was one of the first meme coins and was long thought to have no intrinsic value. Despite this, Dogecoin is now among the top ten cryptocurrencies, with a market valuation of $18.2 billion, thanks to billionaire Elon Musk’s support.

Also read: After being whipped by Netflix, Blockbuster may rise from the dead