Turkish company named ‘Letvision’ has been able to successfully transform an automobile into a transformer robot. This is possible due to joint efforts put in by 12 engineers and 4 supporting technicians. This transforming robot is named the ‘ANTIMON’ and is made out of a BMW 3 series coupe.

This car can be operated using a remote. This autobot has multiple feature which brings us closer to the reality of transformer robots. It is capable of performing functions such as turning its head for up to 120 degrees, moving its arm, neck, fingers, wrist and head due to the motors fit into it. It is also equipped with Wi – Fi.

This auto bot is also equipped with a sound system, an HD LCD and a reactive camera. This reactive camera helps the auto bot to perform various interactive activities making it capable of speech and movement. As of now, the ‘ANTIMON’ is not capable of walking. The engineers have claimed that such a feature is possible to be added if there is any buyer who is willing to pay for such an innovation.

The company Letvision is a research and development company hailing from Turkey. The company has been creating what they called the Letrons by transforming vehicles into auto bots. This particular Letron, the ANTIMON was completed in 11 months. The transformation from the car to robot merely takes around 30 seconds. 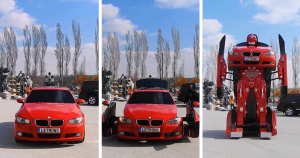 This model is not capable of driving and does not have the legal permission to be on the road. However it can be controlled through a remote. It can read the speed of up to 12 miles per hour. The ANTIMON was kept for auction at Abu Dhabi with an opening bid of $600,000.

This designed has been made to cater to those who have access to a huge sum of disposable income and have an interest in collection of machines. The company is hopeful of eventually developing a mass market in this category.

A similar attempt was made in Japan. A joint venture of Japanese companies J-deite ride, Asratech, Sansei Technologies and BRAVE ROBOTICS have successfully developed a prototype for a humanoid robot named J-deite RIDE.

The robot J-deite RIDE too has the capability of transforming into a robot and a functional car. But what’s special about this robot is that it can be occupied by humans. This provides access for humans to ride the car by using the front two seats. A passenger less option is also available through which the driver can control the car via a wireless network.

The vehicle is capable of reaching the maximum driving speed of 60 kph. However once transformed it can only reach up to a speed of 100 meters per hour. All the companies have worked together to contribute to the various parts of this system. Sansei Technologies is already in the process to commercialize this technology by providing this transforming robot to amusement parks as rides. This technology is still in its infancy stage, however small and gradual developments will be able to provide the audience with a groundbreaking discovery.