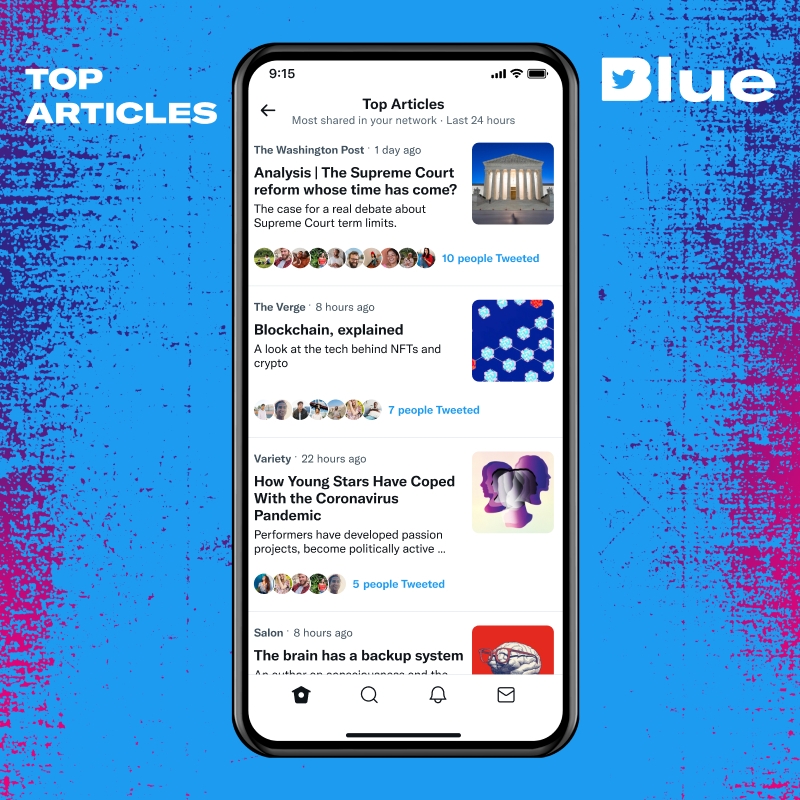 Twitter, the microblogging social media site is one of the world’s most popular platforms that people really enjoy using. From getting to know about the latest feud between Elon Musk and some Senators to knowing the top trending topics in the world, Twitter is our platform where we can scroll and be in touch with the social world.

Having said that, Twitter’s paid service- Twitter Blue has recently announced its Top Articles feature on iOS which creates a report of articles most popular in Twitter Blue’s network, finally. Yes, finally this feature arrives on iOS after the company promised last week that it would be coming very soon.

Twitter’s Top Article feature was already available on Android devices and the web, but now everyone including iPhone users can have access to this super-useful feature where you can get a consolidated list of the top trending articles on Twitter, all in one place. However, this feature is only available to Twitter Blue users and not the unpaid, free, regular Twitter.

Anyhow, this feature is not completely a new feature as it was first launched by Nuzzel, a service provider that did a similar round-up of all the articles trending on Twitter through email. As mentioned in a report by The Verge, Nuzzel was owned by a company named Scroll which was dumped after Twitter acquired the company earlier this year. This, however, is a pretty basic feature that Twitter is including in its paid service Twitter Blue.

There are a lot of users that are discrediting Twitter’s move, but if you want access to this consolidated round up of articles, you would have to purchase and sign-up for Twitter Blue which also gives you other perks such as the “undo” tweets option, ad-free articles and more.

It is true that Twitter Blue does not have much to offer, just yet and it is not worth spending your dollars on this service, unless you are a more than average user of Twitter or if your job requires you to stay active on the platform. Nevertheless, this is only one man’s opinion but there are a lot of people out there who have voted not to opt for Twitter’s premium service- Twitter Blue.

Some users are criticising that the company is pay-walling every tiny feature that should have been available in the basic- regular version of the platform as well, such as this one- Top Articles feature. But Twitter Blue is what the company is focusing on to shape and differentiate more and more from the free version of Twitter by adding new features, trying to make Twitter Blue more useful for users.