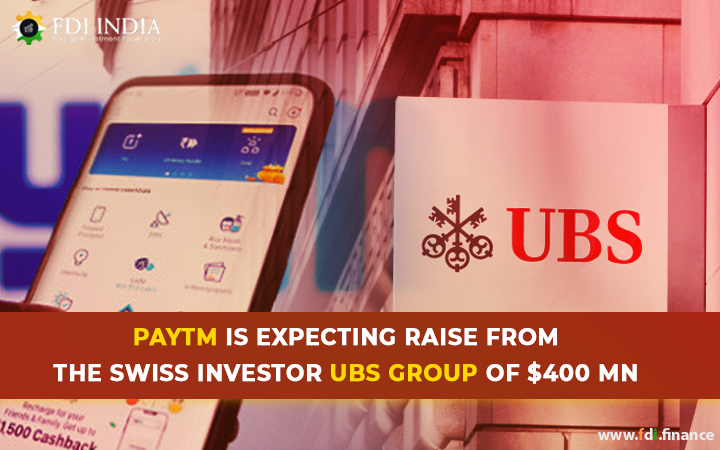 According to sources, the two financial companies are in talks with each other to agree on Paytm stock purchase worth USD 400 million. As mentioned in several reports, if the deal is successful, the Zurich-based UBS Group will enter India’s growing digital payments market through Paytm which has revolutionised digital payments and money lending in India through its platform.

Founded back in 2010 by Vijay Shekhar Sharma and Akshay Khanna, Paytm operates as a sub-organisation of One97 Communications Private Limited. The platform offers payment services to merchants and users to allow them to make seamless digital money transactions right through their smartphone devices. Paytm offers several services including its digital payments bank, money lending services and much more.

Paytm is currently backed by some big names in the industry including SAIF Partners, Alibaba Group, SoftBank and Ant Financial.

In the wake of demonetisation in India, Paytm found its wings and became an overnight success, CEO Vijay Shekhar Sharma mentioned in a statement that the financial technology start-up could turn profitable in 2021 amid the digitisation wave and the adoption of digital services in the country. He further mentions that the company could hit break-even this year as a consequence of its growth amid the COVID-19 pandemic.

As mentioned in the company’s funding timeline, in November 2019, the start-up raised funding worth USD 1 billion in a financing round led by T.Rowe Price, a United States-based Asset management firm. This massive investment took the company’s valuation to over USD 16 billion.

According to recent reports, Shekhar Sharma recently commented that he was surprised by the opportunities of monetisation in the previous months of the pandemic in 2020. He further said that those opportunities were not only from their wealth accounts by also by money lending or loans.

As mentioned in a report by PYMNTS, this deal between Paytm and UBS Group AG will not include the Indian financial technology start-up to raise new funds. The report also mentioned that the two companies are in talks to finalise a deal by the end of this month but not has been confirmed by either party. There has not been any official statement or confirmation, yet.

The COVID-19 pandemic has played a major role in digitising the nation. Start-ups and businesses with a digital presence has proven to grow even during the time of induced lockdowns in the country while many other businesses had to shut down completely. India shows phenomenal potential for digital financial services in the near future and the digital transformation of India has already underway.