It’s raining funding in the fintech sector as another firm Velocity gets a massive amount of seed fund of $ 10.3 million led by US based companies. The thing to look upon is that fintech is creating a major market share which will pre-dominantly create a greater effect especially in the economy of India. To get into know the details of the funding let’s take a look at the information in the article.

Velocity is basically a fintech company that has great founders. The founders took a lot to make this with great vision & determination. The company is basically looking forward to build the future of banking & financial industry through their innovative modes of operation.

They are in direct touch with companies that are direct to consumer players, mobile apps with online revenue, subscription commerce, e-commerce platforms, online gaming and B2B Software as a service. The basic activity of financing is provided by the company at a small fees of 5-8%. The company promises to provide Rs. 2 crore as revenue based financing to give acceleration to marketing and working structure accordingly.

The prominent finance partners associated are :

The all-time attention is provided to new businesses as they require more capital and generally face a lot of hustle in acquiring the same. 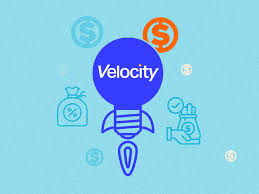 Wednesday was the day when company officially announced that they have raised a total of $ 10.3 million through US based Valar ventures. With this Valar Ventures also marked its first investment in the Indian waters.

The motive to use these funds will be to make the company’s products more suitable for building a great customer base. 300 online businesses have already signed for this financing. The news was also made official that the company would come up with Visa cards that too in partnership with one of their investors.

The co-founder of Velocity Abhiroop Medhekar clearly said that this is the era where we need to get more flexible financing as opposite to those which exist.

The founding partner at Valar Ventures also said that they can see a sense of growth in the Indian Fintech systems that will bring in more innovative modes to help the budding entrepreneurs in the best way possible.

The major competitors of Velocity are GetVantage which also raised an amount of $ 5 million in its seed funding round and also caters to the same segment of markets giving a major competitive edge.

FINTECH IN NEXT 5 YEARS

The future of fintech industry is a study conducted to analyse where the world’s largest consumer market stand on those terms. It is clearly stated that the growth will be tremendous. We have adopted fintech at a rate of 87% and the growth rate will be 22.7% in the 2020-2025 period.

This is the major reason why fintech firms have become more vigilant and have started to focus on their core strengths with full capability. It requires more resources to make & create diverse products at affordable prices.