Former SAP executive Vishal Sikka took over as the CEO and MD of Infosys a little more than 2 months ago. The new CEO presented his first quarterly earnings on Friday during which he also gave a snapshot of Infosys strategy in the coming months. Below are a few focus points of the Infosys Strategy. 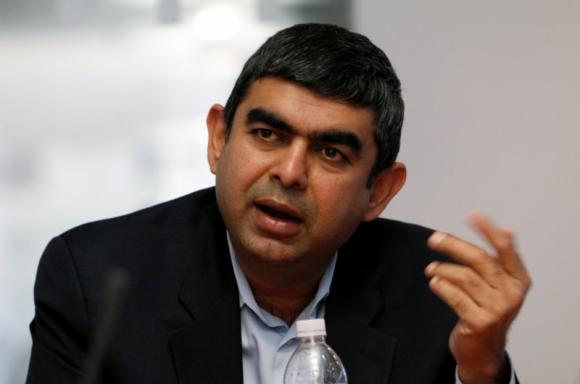 “We believe that a great new thinking in services can be brought to life. We think the world of services itself can be transformed. And that transformation stems from being able to bring efficiency but also automation, artificial intelligence techniques to bear, to amplify the role of the people in the services world.” said Sikka.

While the IT and business process management services organizations are seen increasingly moving towards automating the processes with an aim of enhancing the efficiency and creating a leaner model, this is something also often being considered as a job killer’. However, Sikka says tools like automation, artificial intelligence or natural language processing are technological innovations which are aimed at amplifying the human potentials further. He said, the same thing has happened in the past when the power loom was invented or when technology was used to a greater extent in agriculture thus resulting in green revolution couple of decades ago.

The company has already earmarked $100 mn for investments in new technologies. This innovation will use in-house and external start-ups to build business and bridge technology gaps, and the process may involve co-creation with universities as well. Infosys is also expected to continue to invest for revenue growth, which may make margins volatile in the near term. Key investment areas include sales, employing people with new skill sets, and expansion into new geographies among others.

“Digital transformation is reshaping the business of every one of our clients. We see this as a great opportunity to help them renew the core of their business as well as to expand into new frontiers and are seeing early positive results. Our strategy is to apply the same principles to our own business in order to capture this opportunity and accelerate our growth,” Sikka said after Infosys reported a 7.3 percent sequential growth in net profit to Rs 3096 crore.

Sikka is expected to continue with Murthy’s initiatives, including cost optimisation, sales effectiveness and delivery effectiveness, the former SAP executive is expected to “double” Infosys investment in Intellectual property-led revenues. With Finacle, he is expected to work to bring it on par with the likes of rival TCS’s products by including allied services in it such as insurance. Under the previous management, the company was reportedly mulling selling off the business or cutting down its workforce.

For long, Infosys has insisted on higher-margin deals and stayed away from a more dynamic approach to pricing, even as clients (especially in the financial sector in developed countries) cut back on their IT spending in the wake of the global crisis. This dented the company’s growth prospects, which had a cascading effect on employee morale and sparked a staff exodus at all levels: top and bottom. In the most recent quarter, attrition reached 19.5 percent, the highest in the industry.

Since taking over, Sikka’s biggest priority has been to rein in attrition. Immediately after taking over as CEO, Sikka promoted 5,000 employees, spent time with trainees, gave two to three-fold pay hikes to several employees and urged many to consider staying back.

Sikka also launched a survey reaching out to every employee in the company and asked them for feedback on how the company could improve on various operational parameters.

“Focus on those things that are not possible for the machines to do and bring a great human revolution to life … I believe that a great services rethinking can be done around such a human revolution. But we believe also that the new kinds of services are necessary using the power of techniques like design thinking to be able to go in to new unprecedented areas … to able to do new kinds of things in new kinds of ways, to be able to explore what is interesting and to bring the power of design thinking to bear for this new types of things,” added Sikka who is widely considered as an ace technocrat.

Sikka has launched a programme that would impart training to employees and said he would help employees develop skills in “design-thinking”, in which special emphasis is laid on improving consumer focus and ergonomics.