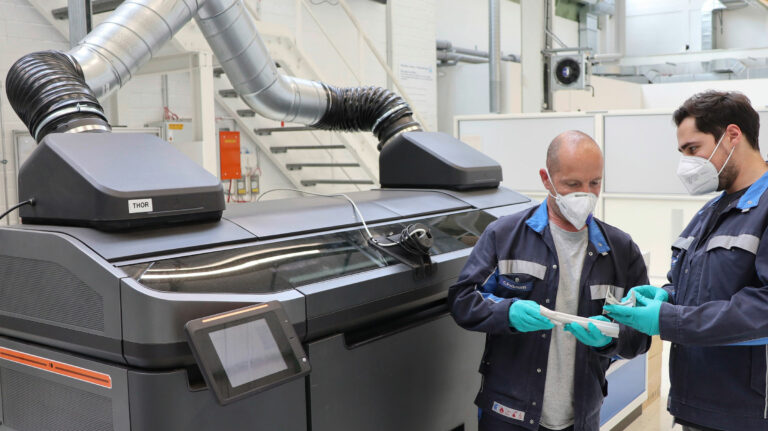 Volkswagen to 3D print vehicle parts in partnership with Siemens

Volkswagen is shifting its manufacturing process by using 3D-printed car parts. In partnership with Siemens, the parts will be manufactured layer by layer with metallic powder. Then the resulted component attached with an adhesive is heated and shaped accordingly. Volkswagen sent out their A-pillar component for certification to T-Roc convertible production in Osnabrück factory.

Member of the Board of Management of the Volkswagen Brand responsible for Production and Logistics is Christian Vollmer. He said, “Despite the coronavirus crisis, we’re working on innovation, and we aim to make 3D printing more efficient and suitable for production-line use.”

Now, Volkswagen claims to be the only car company to apply 3D technology to its futuristic manufacturing plant. Vollmer adds,  “Together with our partners; we aim to make 3D printing even more efficient in the years ahead and suitable for production-line use.”

Furthermore, the company has invested a double-digit million euros in the past for innovative manufacturing processes. In addition to their partnership with Seimens, they are expanding their collaboration with printer manufacturer HP.

HP already provides high-tech printers, which will have Seimens technology. Volkswagen will use the resulting technology. Here the key challenge would be the positioning of components. With this, Volkswagen can produce twice as many parts as current production. These are to be manufactured in Wolfsburg.

Interestingly they made more than one million components in 25 years. And currently, they are shifting to electric vehicles. By 2025 they plan to make more than 100,000 components.

Additionally, they weigh less than original components, thus giving an advantage while building electric cars. The testing process of these components on electric vehicles has been done and was successful. Vollmer said,

“I’m pleased that we have a strong and innovative partner in Siemens so we can start working on the car production processes of the future. The example of 3D printing shows that this transformation harbours many diverse opportunities for innovation.”

The alliances mean there is more space for development. They plan to experiment and progress accordingly. Tesla, the toughest competition in the electric vehicle era, uses automation technology and has its own manufacturing equipment of its own. Even during a crisis, carmakers are moving forward with advancement.