Watch: New Self Learning Robots Can Adapt Easily to Circumstances

The field of robotics is ever changing and evolving. Each day we get to hear about a new development that is better and more efficient. Robotics has seen tremendous growth in the last few decades. There are robots which are capable of reaching till the ocean bed and there are those which can climb even the most difficult obstacles in their way.

With the amount of advancement in science and technology this field is not expected to slow down any time soon. Now, researchers at AMOLF’s Soft Robotic Matter group have now claimed that a small and autonomous group of self-learning robots are capable of adapting easily to changing circumstances. The details about this are published in a scientific journal named PNAS.

Bas Overvelde who is the principal investigator at the AMOLF’s Soft Robotic Matter group said, “Ultimately, we want to be able to use self-learning systems constructed from simple building blocks, which for example only consist of a material like a polymer. We would also refer to these as robotic materials.”

The approach used was simple. A bunch of simple robots were connected in a line. Once this was done, each robot taught itself how to move forward as quickly as possible. The researchers were successful in getting their hands on simple and overlinked robotic carts. These robotic carts move on a track in order to learn how they can move as quickly as possible towards a particular direction.

Bas Overvelde explains, “This is a new way of thinking in the design of self-learning robots. Unlike most traditional, programmed robots, this kind of simple self-learning robot does not require any complex models to enable it to adapt to a strongly changing environment.”

He added, “In the future, this could have an application in soft robotics, such as robotic hands that learn how different objects can be picked up or robots that automatically adapt their behavior after incurring damage.” 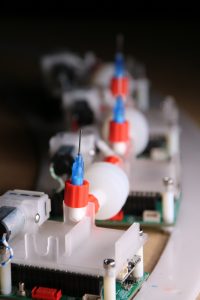 These self-learning robots are equipped with a microcontroller, a motion sensor, a pump that is required to pump air into a bellows and a needle whose function is to let the air out. This technique let’s the robots ‘breathe’. Also, if one tries to link another robot to one robots bellows, they end up pushing each other away. This leads the entire train of robots to move.

To explain this process in simple words, if one allows these robots, two or more in number, to push and pull at each other in this way it will lead the entire train to move in a particular direction.

The researchers are involved when it comes to providing these robots with a simple set of rules in advance. These are communicated to robots with the help of computer codes. The rules provide the robots some idea about what they are supposed to do such as switching the pump on and off every few seconds or to move in a certain direction.

A chip is planted within the robots to measure their speed. By now it is a known fact that robotics can achieve much more with the amount of technology available. Advancement in this field can prove to be beneficial in more than one way. When it comes to performing dangerous and tedious tasks or to simply assist or supervise in some tasks, it will be interesting to see how far this field can go.